Gianni DeCenzo is a star on the rise thanks to the popularity of Cobra Kai on Netflix. After recurring in season 1 as the unassuming nerd Demetri, he graduated to series regular on The Karate Kid series. The character, often the victim of high school bullies, has gained the confidence over time to stand up for himself.

His evolution has certainly struck a chord with viewers, especially in season 3 when his “Asshole” speech motivated Miyagi-Do and Eagle Fang to unite in the fight against Cobra Kai. With season 4 just wrapped, we caught up with DeCenzo to talk about Demetri’s journey. How has life changed for you this year?

Gianni DeCenzo: When we were on YouTube we got recognition but going on to Netflix it definitely increased our visibility a lot. With the pandemic, I wear my mask everywhere I go. Even then, I still get recognized. I had someone come up to me today and said, “I knew you from the eyes!” I’m feeling a lot more support and love. I’m happy we have such an amazing fanbase.

How much of yourself do you see in Demetri?

Over time being on the show, the line gets blurrier. I do put a lot of myself in Demetri. I am very nerdy. I enjoy anime, Magic: The Gathering, all that stuff. I’m not as sarcastic and crass as him, but it’s pretty close. When we were doing the mall fight in season 2, I’m in the comic book store and in between rehearsals during that entire fight scene, I actually went over to the comic book store and bought some comic books. Deadpool, really good edition. I think that says it all. What does it mean to you to see your character resonate so much with everyone?

I didn’t even expect when I first started that I would be able to help people the way I have. I know what it’s like not to be the “cool kid.” It can be tough. I‘m glad as Demetri I can show people it can also be worse. You can be beaten up by a whole karate gang but just power through it. In all seriousness, it is cool to show people you can make it through.

How would you say your karate skills have improved?

Before each season we have a solid two weeks of just training. We have a little bungalow where we train and work out. The stunt people kick the sh-t out of us for a solid two weeks to make sure we can kick the sh-t out of each other, which is a beautiful thing. I definitely think that compared to season 1, I’ve grown. If you look back then to now, I look like I could kill past me. It’s awesome.

Have you gotten any serious injuries?

I was fortunate not to get as hurt because, up until recently, Demetri doesn’t do a whole lot of karate. Now that we’re getting into things, there may be a couple of close calls here or there.

Demetri and Eli “Hawk” were on opposite sides for so long before coming together again. What are your thoughts on their friendship and your one off-camera with Jacob [Bertrand]?

The Binary Brothers have been through it. Last season with my arm getting broken by him, which was obviously the worst. Now we’re kind of seeing them get back together. It’s looking positive. There might be some stuff we have to work out here and there, but overall I want to say Eli and Demetri are Binary Brothers again. Jacob is an amazing guy too. He actually got me into Magic: The Gathering. He is very good at it. I think each season we play maybe a thousand games, and I win two maybe. He is a really great guy to work with.

Fans loved your motivational speech from last season. When you initially shot it, did you get a sense it would be so memorable?

When I first got the script, I had no idea the speech would be dubbed the ‘asshole speech,” which a lot of people are calling it. This was definitely a low point for Demetri’s grand eloquence for sure. He is normally a little more well-spoken, but we are in difficult times. I just love being able to do speeches like that. It’s one of my favorite things because it’s when he speaks his mind. It shows that compared to season 1 he is starting to stand out for himself. The fact people loved it so much warms my heart. We’ve also seen Demetri in a budding romance with Yasmine [Annalisa Cochrane]. How is it for you to be able to show even nerdy guys can get the girl?

It’s really inspirational for me too because I am a nerdy guy. It’s really cool to see their romance start to blossom, even though Yasmine may not want to admit it. She wants the “D-Man,” what can I say? She can’t hide it. Looking back at season 1, we had Eli and Miguel (Xolo Maridueña) sitting across the table from the popular girls. It’s cool to see the evolution there.

Ralph Macchio and William Zabka were once in your shoes as teens making their way through the business. What have you taken from the experience of working with them?

This experience has been like a free college they pay me to go to. I eventually want to make my own TV shows and film, so getting to be on such a professional set like this with guys like Ralph Macchio and William Zabka is amazing. They are absolute professionals, and working alongside them, shows this is how the big dogs play. It doesn’t just take a village but a well-developed city to make a show. It’s an awesome experience.

What was it like back on set after so long?

After getting to be back on set after about a year, it was amazing. I was nervous. Did I know how to play Demetri anymore? Eventually, it was like riding a bike. It was a little bit more difficult with COVID regulations where you have to wear masks all the time. We actually wore our masks throughout training, but it was awesome to see everyone again. We needed to be able to get back into the swing of things. It was a relief.

What can you tease about season 4?

Without getting fired, I can say this season will be big. I don’t know how the writers do it, but they seem to top themselves with the All Valley tournaments, the school fights, the home invasion. With season 4, I can’t give anything away but it’s definitely worth the wait. It’s going to be amazing this season. I guarantee it. That’s the most I can say without getting a call from [co-creator] Jon Hurwitz and being fired.

Long-term what do you hope to see for the future of the show? Maybe a movie down the line?

I’m not opposed to a movie. That would be very interesting. I just want to see the characters we have and new characters we welcome in each season evolve. I’d love to see them go to college and where they go in general. As far as Demetri goes, I want to see him grow into himself a little more. He is starting to become more confident in himself. 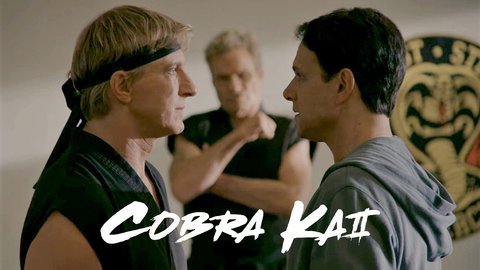