The laughs just keep on coming with plenty of new comedies on the horizon.

Before FX’s riotous TV adaptation of the 2014 vampire comedy movie What We Do in the Shadows, there was this New Zealand spinoff mockumentary, making its U.S. debut with the movie’s cop characters (Mike Minogue and Karen O’Leary) tackling all sorts of spooky cases. Sunday, July 11, 9/8c, The CW 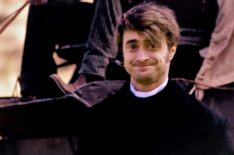 Josh Peck stars as a by-the-book U.S. marshal who inherits a slobbering French mastiff that turns out to be the perfect four-legged partner. On this spinoff of the 1989 movie, Peck plays the son of Tom Hanks’ character! Friday, July 16, Disney+

Sandra Oh goes from Killing Eve to breaking barriers in this naughty rom-com from executive producer Amanda Peet about the first woman of color to chair the English department at a prestigious but stodgy university. Friday, August 27, Netflix Daniel Radcliffe and Steve Buscemi circle the wagons for the third season of the comedy anthology. This time, they play hapless homesteaders headed west who deal with dysentery and less-than-divine intervention. Tuesday, July 13, TBS