Fans weren’t the only ones who were blindsided by the announcement that NCIS: New Orleans is ending with its current seventh season. The star, Scott Bakula, who plays Special Agent Dwayne “King” Pride, was as well.

“This being the last season, going out in the middle of a pandemic, I didn’t think it was going to happen,” he admits as part of TV Insider’s video going behind the scenes of Pride and Rita’s (Bakula’s real-life wife Chelsea Field) series finale wedding (airing May 23). “I’m surprised the show was canceled.” 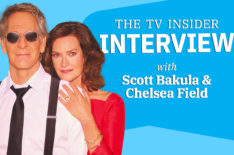 He also acknowledges the fans who have been tuning in over the years. “They followed us to several time slots,” he recalls, and Field laughs in agreement. When NCIS: New Orleans premiered in 2014, it aired Tuesdays at 9/8c. It moved to 10/9c in Season 3. During Season 6, it changed nights to Sundays at 10/9c and occasionally 9/8c. There were also sometimes sports-related delays for the primetime lineup on Sundays.

“I appreciate they’re sticking to us and sticking by us and that transfers to all around the planet. We’re in 200+ markets all over the world,” Bakula continues. “We’ve had a great run. They’ve been very supportive. They seem to have liked the show, they like the stories we told, the characters on the show, and that’s why we do it. We do it because we want people to grow a relationship and attach and invite us into their homes and we don’t take that lightly. I never have. I honor them and we have always had had a great relationship and I look forward to continuing that in the future.”