From ‘Fear The Walking Dead’ to ‘Army of the Dead,’ Garret Dillahunt Is Still Fighting Zombies

We’re still mourning John Dorie on Fear The Walking Dead, but Garret Dillahunt has another undead-filled adventure coming this month. In Zack Snyder’s new movie Army of the Dead (hitting Netflix May 21), he’ll play another survivor battling his way through the dead-infested world… albeit, as he says, not quite with the morals of John.

We chatted with Dillahunt about his work in the zombie genre—and nabbed a nifty tease about what’s next for June (Jenna Elfman) on Fear The Walking Dead. I’ll start by asking you the obvious question: What is it with Garret Dillahunt and zombies? You’ve gone from Fear The Walking Dead to Army of the Dead.

Garret Dillahunt: I don’t know if there is a “thing,” there’s only two of them! But I like the world. I like the genre. I like sci-fi and fantasy stuff, in general. This is pure coincidence, in a way. I mean, when did zombies start—in the ‘70s? I don’t know what the fascination is, but we all have it, it seems. I think it’s more about, what would I do in that situation? And maybe it’s more fantasy, you know. Like I can take care of those people I’ve always hated, if they become zombies. [Laughs]

What drew you to Army of the Dead?

Well, it’s a Zack Snyder movie. I had always wanted to work with him. I liked that he was operating the camera himself. It seemed like a total reinvention to me, of the genre. There’s a variety of zombies with different capabilities, and that’s intriguing. I think he likened the “Alpha Zombies,” which are the scariest zombies, to a pack of wild dogs. If you watch them hunt in Africa, they are smart. They have a hierarchy and intelligence, and they are incredibly dangerous because they work as a unit. And that [in zombies] would be a nightmare.

It’s like it was in the beginning on Walking Dead and Fear: We don’t know a ton about them at this juncture, on Army of the Dead. A lot of the team, [my character] Martin included, is learning on the fly. They’re like, “What? There’s zombie animals?” That’s terrifying. They’re bigger, stronger, faster anyway, and now they’re zombies? How do you deal with that? I was going to ask if you prefer one over the other—fast, smart zombies or the slower Walking Dead-type zombies.

Well, it depends on which way you’re asking. If it’s “Which would you rather be dealing with?” I’d say Fear the Walking Dead’s walkers. But if I’m speaking from an entertainment standpoint, I’m much more riveted by stuff like you’re going to see in Army of the Dead, or World War Z, that kind of thing. What do you do? Holy cow.

Was it an adjustment for you to step into Zack Snyder’s zombie-verse, after being on Fear for so long?

I suppose so, but it wasn’t a hard adjustment. [I play] a completely different character, I’ve got different weapons and it’s a different set of circumstances. But it wasn’t any weirder than doing any other job after you’ve finished a job.

Tell me about Martin. Does he have anything in common with John Dorie? What is he like?

They’re both played by Garret Dillahunt, but that’s probably about it! Martin has a little more money behind him, but no one has the morals of John Dorie. It’s great working with Zack. I always wanted to work with him, and I’ve been a fan of his movies, and I’ve worked with so many people who have worked with him and speak highly of him. It was a lot of fun to finally check that off the bucket list. I hope I get to work with him again. He’s a very athletic guy, so he would demonstrate things he wanted me to do—just making them up on the spot. And he would do it immediately, and then it would take me about five takes to do it! I just trust him. You know it’s going to look great when you’re working with Zack Snyder, so it’s about getting the scenes right and playing your part. I like that he also likes to infuse humor into the most dire situations. I really appreciate that.

Post-Army of the Dead, do you see yourself doing more work in the post-apocalyptic or zombie genres?

I’m not against it. I’ve got some things lined up [right now], my own TV show, which I’m very excited about. It’s not post-apocalyptic, but it is post-pandemic. [Laughs] But yeah, I’ve always been a fan of sci-fi and fantasy and all that kind of stuff. And there very well might be post-apocalyptic stuff in my future. I hope I’m lucky enough to have those choices. They’re doing that Tales of The Walking Dead spinoff, and it would be cool to see John come back for an episode.

Who knows? I really like [executive producer] Scott Gimple as a person, and you never know what he’s got up his sleeve. Well, I hope there’s more John! Fans do miss you on Fear…

Ah, it’s only been a couple of episodes! He was a great character, and I really enjoyed playing him for three years of my life. He exists, he’ll be part of the universe forever now.

And June now has his hat. And his gun.

Jenna [Elfman]’s a great actor. While I’m sure this is not the most wonderful of circumstances, this is going to spawn some great stuff for June. I happen to know there’s some stuff coming down the pike that fans aren’t going to want to miss. I’m not going to spoil anything, but I’m going to say keep watching, keep supporting. I love those people. 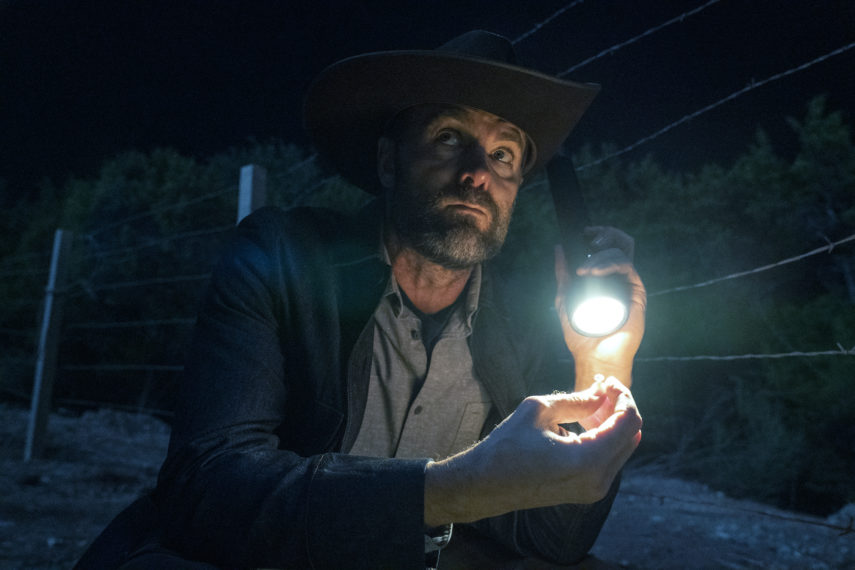 Tell me about your upcoming projects.

Well, I’m pretty excited about the TV show [IMDB TV’s Sprung]. That’s something [Raising Hope executive producer] Greg Garcia and I have been working on since last March; we just started throwing ideas out. I was telling him about the guy I wanted to be and the type of show I wanted to be in. I wanted to do some comedy, and we get along so well, and we think so much alike. It’s so easy to work with him. He came up with this great idea [about a group of formerly incarcerated people aiming to do some good with their criminal expertise], and we started casting the thing and came up with such a great cast [including Illeana Douglas and Phillip Garcia]. I’m nervous, they’re all so good! And right now, I’m in New Orleans where I’m shooting Where The Crawdads Sing [based on the Delia Owens novel]. I’m really proud of this one.

And I finished the movie Ambulance, which Michael Bay directed, right before this—there’s a lot of car chases and explosions and even a few laughs in that as well. I enjoyed myself on that. And after that, I’ve been working on a movie myself. I have a property that I’m very excited about that I’m starting to adapt. It’s by an author I really love, named Kevin McColley, and we struck up a friendship over the past year. He sent me a manuscript, so I’m trying to position myself to get this movie made. I’m starting to look for a director to attach to it. I feel really good, and I’m really happy about where things are going. I’m excited for this next stage of my life and to be focusing on things that I really, really want to do.

Army of the Dead, Movie Premiere, Friday, May 21, Netflix

Army of the Dead where to stream