Attention, home shoppers! You may think you’re besties with your favorite HSN hosts, the affable personalities who get you to open your wallets for clothing, jewelry, home goods, and other wares. But how much do you really know the people behind the products?

For example, who was once an NFL cheerleader? A disco champion? A Radio City Rockette? A Justin Timberlake love interest?

And for that matter, which host wore fake eyelashes to her childbirth? Who was once morning TV’s go-to relationship expert? And whose scrapbooking expertise has gone international?

We’ve culled fun facts about the current crop of HSN hosts from their official bios and elsewhere on the web, so read on for all the deets! 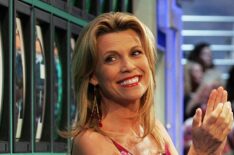 1. When Adam Freeman was a child, he dreamed of becoming a professional wrestler.

4. Before she was an HSN host, Debbie Denmon was an Emmy Award-winning news anchor.

6. Lesley Ann Machado wore false eyelashes during as she gave birth to her baby because she “wanted to look fabulous throughout!”

7. When she’s not on HSN, Marlo Smith volunteers as a Guardian ad Litem, which is a court-appointed guardian who protect their ward’s interests during cases.

8. Nicole Hickl hasn’t always been an HSN host: She used to be a Houston Texans cheerleader.

9. Sarah Anderson says her love for fashion was born while she was a Radio City Rockette.

10. Shannon Fox appeared as a relationship expert on several shows, including Today, Inside Edition, Extra, Nancy Grace, and The Early Show.

12. Suzanne Runyan has twice traveled to Africa… to teach scrapbooking!

13. A queen with a gambit? Tamara Hooks is an avid chess player who collects unique chess sets.