“The town is shut down to half capacity. It’s crazy!”

It’s February 2021, and Deadliest Catch‘s Capt. Sig Hansen, who’s chatting with us via Zoom from the wheelhouse of his F/V Northwestern docked in Dutch Harbor, Alaska, is still incredulous about the pandemic’s devastating effects on the crab fishing industry. 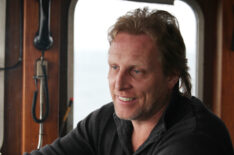 Season 17 of the Emmy-winning reality series, shot last winter, picks up at a crisis point: Half the Bering Sea fleet is tied up in Seattle due to increased COVID-19 regulations. If the boats that have made it to Dutch are unable to catch the fleet’s full 5 million-pound quota, they will fail to prove the health of the fishery and could face a government mandated shutdown to allow time for crab stocks to replenish. Sig, whose crew includes his savvy daughter/relief captain, Mandy, and her husband, Clark Pederson, has to get creative. He convinces F/V Time Bandit cocaptain Johnathan Hillstrand to come out of retirement and talks the series’ competitive, territorial captains into a pact promising they’ll share information about hot spots to maximize the numbers.

“How long is that trust gonna last?” Sig asks in the two-hour premiere. Longtime fans can guess!