Christian Cage Opens Up About AEW, and the New Chapter in His Career

At All Elite Wrestling‘s March 7 Revolution pay-per-view, owner Tony Khan teased a “Hall of Fame”-worthy talent would sign with the company. He wasn’t kidding: It was Christian Cage, who shocked fans as a surprise entrant in the WWE Royal Rumble less than three months earlier.

The decorated performer (real name: Jay Reso) initially retired more than six years ago due to concussion-related injuries before getting reassessed by doctors. Cage, 47, is excited to continue his career and challenge himself, going against the hungry young stars of AEW. TV Insider sits down with the hot acquisition to talk about his first impressions of the company, and more. What did you think of the way you debuted for AEW?

Christian Cage: Complete transparency, our initial conversations were me coming in being a surprise. I guess Tony felt differently. The thing is, wrestling fans can be fickle, especially on social media. They want the backstage scoops. When you make a [mystery] announcement like that, you have people who want it to be their pick. They’re always going to be people super happy or super disappointed. All you can do is control what you can, and trust Tony’s vision.

How much did Edge’s return to the ring after retiring inspire you to do the same?

It did put the seed in my brain that it would be good to go back. It’s hard when something is taken away from you, something that has been your entire life. It can be tough to accept.

Was there anything that lit the spark again for you?

When I did the unsanctioned match with Randy Orton in the summer, I was on the “no-contact list.” I thought, “Wow, I’m that fragile that I can’t be touched?” It didn’t sit well with me. I felt great. I decided to go on my own to the University of South Florida and see some doctors and do testing and have a long conversation. I told the doctor I wanted to step back in the ring to finish my career on my terms. When he said I can, it opened a bunch of doors for me. My test results and scores were good. I did another round of more rigorous testing in Pittsburgh and the doctor there said the same thing and here we are today. How have you been getting ring-ready?

It was physical training. I was in shape, but when you retire you’re enjoying the barbecue a little more on the weekends. I had to dial everything back in. I got my diet on point. I built a little gym in my garage and started putting in the work. I got in the ring probably at the end of June [last year]. And to be honest with you, I didn’t get in the ring again until the Royal Rumble. I pushed a little bit more each time.

What do you make of this age discussion based on the trend we’re seeing of veterans in their 40s, 50s and even 60s wrestling?

There’s no other feeling like being in the ring in front of live audiences. We live for that reaction. It’s our bread and butter. With schedules being much different now, it does make it easier for older talent to continue to perform at a higher level.

From your short time in AEW, what can young talent can do to make a difference in their game?

It goes across the board, not just AEW. Everything moves so fast now. It would be great to see them taking in the moment more and getting more mileage out of things that are being done. This is such a young roster and with them wanting to stimulate their thirst for knowledge, I think everyone is going to keep improving. 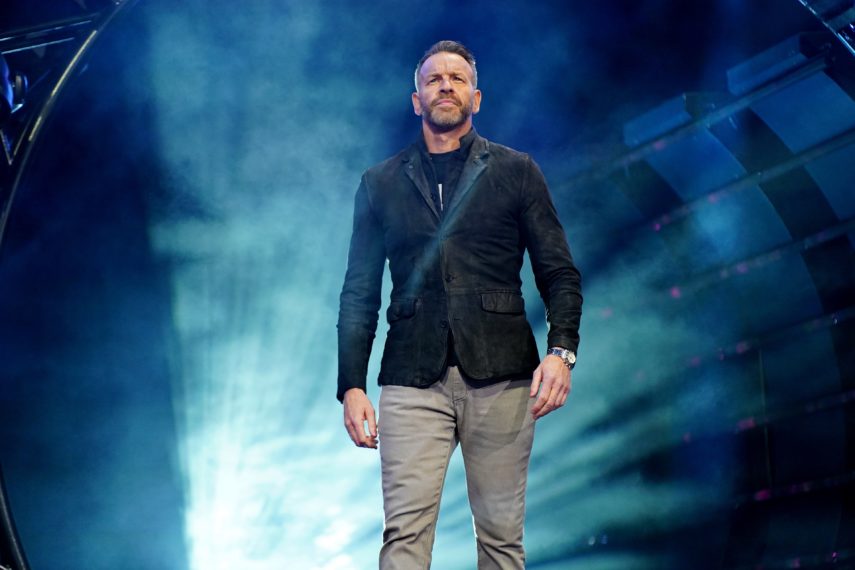 Anyone in AEW you’re particularly impressed with?

MJF gets it and understands what he’s trying to convey at all times. He has that poise and confidence that is hard to teach. He just has it. I look at Darby Allin, who has that cool factor about him, that Jeff Hardy feel where people just gravitate to him. It will be interesting to get that newer Jeff Hardy-type feud against Darby. I look at the women. Jade Cargill has all the tools to be a huge star. Britt Baker is doing great things. She is the face of the women’s division. She really stood out to me as well as Thunder Rosa. Their match was unbelievable. The future is pretty set up here in AEW.

Given the worker Kenny Omega is, do you consider him your ultimate challenge?

I think there are a portion of fans who would have never thought about seeing us face-to-face in the ring. He’s a special talent. We could raise each other’s levels at some point.

AEW has made some big moves recently, signing you and Paul Wight — guys who have been in WWE for decades. Do you think this sends the message about the other options that are out there?

I was a free agent. I wasn’t locked in anywhere before [signing with AEW]. I had the opportunity to explore all my options and did that. When I left WWE [for Impact Wrestling] in 2005, I believed in betting on yourself. You can’t go wrong when you do that. You have to make the best choice for you as a person and performer. For me, that choice was AEW.