Who’s in the Cast of Discovery+’s ‘Pig Royalty’? (PHOTOS)

Everything’s bigger in Texas — including the hogs!

New Discovery+ series Pig Royalty puts 4-H rivalry to the test as two farming families dive headfirst into the muddy drama of pig show competitions. According to the press release, the reality series follows both sets of pig parents as they “criss-cross Texas competing for the ultimate prizes: money, scholarships, big, shiny belt buckles that ‘crown’ the winner, and all the bragging rights that go with them.”

The first two episodes drop March 23 on the streaming platform, and tease what fans can expect from the down-and-dirty world of Southern family farming legacies. Streaming Service Spotlight: Everything You Need to Know About Discovery+

Find out where you can stream the reality-TV lover's dream. Plus, what shows are available.

Let’s meet the families who are taking home the bacon!

Matriarch Michelle Balero coaches her three daughters McKayla, McKenzie, and McCall in how to train their younger cousin Taytain “The Nugget” Diaz. According to The Daily Beast, former cheerleader McKayla is a winner in her own right, and has earned upwards of $65,000 in one year. Nicknamed “The Blingy Girls,” the Balero sisters use their thorny personas to their advantage in competition. Yet some of that drama hits too close to home: There are allegations of a Balero girl getting intimate with a judge, while others claim the family “juice” their pigs to plump them up ahead of showing.

Similarly helmed by a mother-daughter team, the Rihn family takes pig competition seriously. Jodi takes the lead with her two daughters, Kammi and Keylie, but is hoping her 12-year old son Kannen will take home his first championship belt. The “family of five with a showpig addiction” on Instagram also have their sights set on “settling a score” with the Baleros.

“The smell of pig sh*t is one of a kind,” Jodi boasts in the trailer. “But it smells like money to us.” Kammi made $30,000 from showing pigs to pay for college.

It seems hogs really do reign supreme for the Rihn family. “To the world, these animals are our babies, friends, livelihoods, and world,” Kammi shared on Instagram. “We raise them like you would your pets…Sometimes they even eat and sleep better than we do!”

Jodi also introduces Mandy and Kristen Tyk into the realm of pig judging, while their teen son Brandon wants to return to the hog world.

It seems like all’s fair in love and pig competitions! 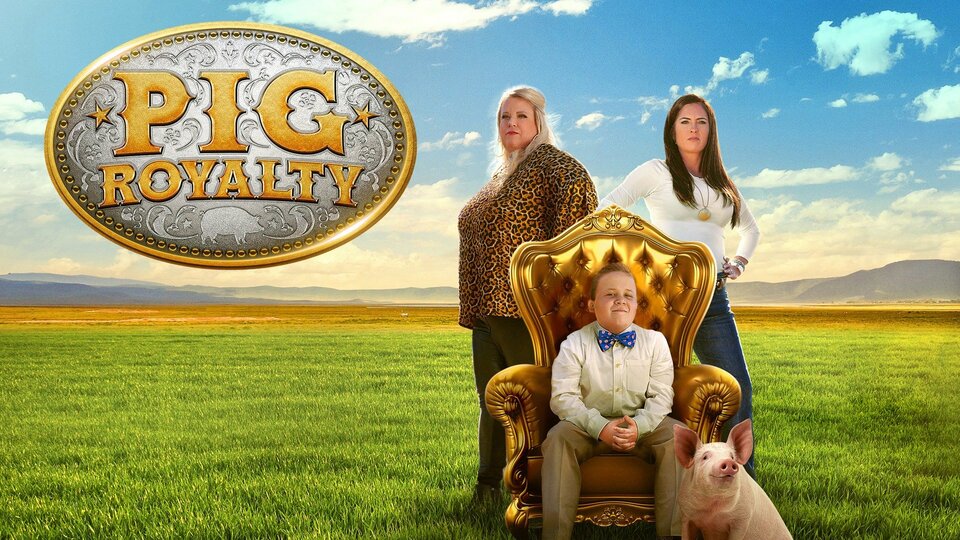 Pig Royalty where to stream