Lisa Vanderpump has landed herself a hot and tasty new reality series.

The Real Housewives of Beverly Hills star-turned-franchise’s latest outing is Overserved With Lisa Vanderpump, premiering March 18 on E! This time around the restauranteur will throw intimate celebrity-laden dinner parties in the garden of her Beverly Hills mansion, Villa Rosa, and the show promises it won’t be just for meals — games and surprises are on the agenda. 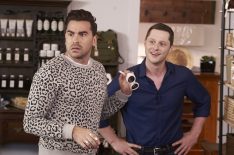 Judging by the trailer released for the show, below, things get a little wild when the booze starts flowing.

“The guests should be naughty, but the hostess must always be naughtier,” says Vanderpump, whose growing TV empire also includes Vanderpump Rules and its spin-off Jax and Brittany Take Kentucky.