Resident Alien (10/9c, Syfy): E.T. would phone home in alarm if he witnessed the antics of this inspired sci-fi comedy’s title character: a crash-landed extraterrestrial on a mission of annihilation who takes over the body of Dr. Harry Vanderspeigle (Firefly‘s Alan Tudyk). While the new Harry learns the ways of humans by watching endless repeats of Law & Order (the Jerry Orbach variety), he is recruited against his better judgment to help solve the murder and take over the job of the town doctor from nearby Patience, Colorado. Patience is one virtue the alien Harry has yet to learn, especially once he encounters a kid who can see through his skin suit to the bug-eyed menace within. (See the full review.) 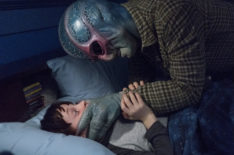 Remembering Donna Reed: Turner Classic Movies salutes the Oscar-winning (for From Here to Eternity) actress, an early avatar of TV sitcom domestic bliss as the title star of The Donna Reed Show (1958-66) and a short-lived replacement Miss Ellie on Dallas, on what would have been her 100th birthday. (She died in 1986 at 64 of pancreatic cancer.) Though best known for It’s a Wonderful Life, Reed’s movie career was rather eclectic, and TCM devotes the day (6 am/5c to 8/7c) to seven of her films, starting with 1941’s Shadow of The Thin Man and including 1947’s period piece Green Dolphin Street (11:15 am/10:15c), as Lana Turner’s sister in New Zealand. Host Dan Rather on His Conversational Approach to 'The Big Interview'

The 88-year-old legendary newsman returns for Season 8 of his AXS TV series.

The Big Interview with Dan Rather (8/7c, AXS TV): Country-music great Randy Travis reflects on life after a near-fatal 2013 stroke in an inspiring interview, aided by wife Mary to do the lion’s share of talking. Among the most moving moments: reliving his induction in the Country Hall of Fame in 2016, when he surprised his famous friends with a rendition of “Amazing Grace,” a quality Travis demonstrates throughout. Plus, 50 Cent could return as Cassius to tangle with the wrongfully convicted inmate.

Penguin Bloom (streaming on Netflix): In the market for a heartwarming tear-jerker? Naomi Watts is earning accolades for this fact-based film about Sam, an Australian wife and mom who is paralyzed after a freak accident on vacation and sinks into depression. She and her family (including The Walking Dead‘s Andrew Lincoln as her husband) find renewed hope and purpose when they take in an injured magpie they name Penguin, and its recovery echoes Sam’s own journey toward acceptance. For Life (10/9c, ABC): You’d think the last place one-time inmate-turned-jailhouse lawyer Aaron Wallace (Nicholas Pinnock) would want to go back to is Bellmore prison. But as the legal drama resumes its second season, he teams with his former warden, Safiya (Indira Varma), to investigate conditions that have led to a growing COVID-19 outbreak. On the home front, Marie (Joy Bryant) is also weighing her options regarding her family’s health and her work at the hospital in the wake of the virus. Plus, what's to come for Ben and Darlene's relationship later this season.

Inside Wednesday TV: Comedian Whitney Cummings joins the panel on Fox’s The Masked Dancer (8/7c) as the three finalists from Group A and Group B combine to compete as the “Super Six.”… In a rare bit of good news for ABC’s The Conners (9/8c), Darlene (Sara Gilbert) gets a promotion at Wellman Plastics… Lifetime’s Marrying Millions (10/9c) returns with another look at couples who personify society’s haves and have-nots.

The Big Interview with Dan Rather