Host Dan Rather on His Conversational Approach to ‘The Big Interview’

Dan Rather certainly knows what makes a good interview. After all, he has done thousands of them over his storied career in news, sitting down with everyone from world leaders to pop culture icons. For the legendary newsman, it comes down to preparation and a keen ear.

“You have to do your homework,” said Rather, whose show The Big Interview With Dan Rather is returning to AXS TV for Season 8 with a premiere episode April 15 featuring Huey Lewis.

The coronavirus crisis has affected the whole television dial, but without live sports to cover, sports networks are really feeling the pinch.

The series began with Rather interviewing award-winning director, producer, screenwriter and playwright Aaron Sorkin, but a majority of subjects veered more toward the music world, though Rather is quick to point out some of his most memorable aren’t necessarily from that realm of entertainment.

“I was really interested to meet and interview Quentin Tarantino,” he said. “He gave us what I think is one of the best interviews he has done.”

The tables have turned in this case, as we sit down for a big interview of our own with the beloved news anchor and journalist. It’s called The Big Interview, but I see it more as a conversation where it’s you sitting down with these iconic figures and having them open up while sharing stories. The NBC drama returns on April 30.

These days there are probably many viewers revisiting the one you did with Kenny Rogers. What do you remember from that experience?

With Kenny Rogers, it was one of the most enjoyable times I’ve had. Keep in mind, Kenny Rogers came from around the same area that I came from. I can remember when Kenny Rogers was playing lounge acts in the hard suburbs around Houston. I never knew him particularly well, but I had seen him play in places like Pasadena and Baytown early in his career. Kenny Rogers had so many qualities that one admires and one wishes they had more of. Kenny was always filled with gratitude. Mr. Gratitude. He knew how blessed and lucky he had been.

He also had a wonderful sense of humor, which when people get a lot of attention and publicity and heights they have, sometimes the missing quality to me is losing their sense of humor. What made him a star and a fortune and famous is he was a wonderful storyteller. I do remember he showed some disappointment with me because he wanted me to do a duet with him. This was his idea. It’s well-known I don’t have a musical background. I don’t play any instrument. That old line has been said of me, “He couldn’t carry a tune in a bucket with a lid on it.” He wanted me to sing harmony for him, and try as I may, I couldn’t do it. He wanted to have that happen.

You’ve had such an eclectic mix of performers on your show. How would you say it has broadened your musical horizons? What would people be surprised to learn that you listen to now?

I listen occasionally now to hip-hop. I have an 18-year-old grandson. Since he was 13 or 14, he has been trying to educate me along the lines of the more current music. I grew up around country music. I grew up during the 1930s, 1940s into the early 1950s, where if Ernest Tubb or Johnny Cash didn’t sing it, I didn’t know it. I did know some rock ‘n’ roll, the rise of Elvis Presley. I do know more about rock music than I ever knew before. It wasn’t like I was unacquainted, but I didn’t know a great deal about it.

For example, Debbie Harry of Blondie [interview subject in the April 22 episode]. I’d be honest to say I’d heard of Blondie and knew who Debbie Harry was, but until I got into my own work I knew very little about her. It turned out to be another one of my favorite interviews we have done. She was a real surprise to me because she had a reputation of being a punk icon, associated with Andy Warhol and had past struggles with drugs and so forth. I thought it would be a tough interview where she would be kind of standoffish and hard to get through. She was just the opposite. She couldn’t have been more accommodating. She had a great sense of humor. She was as blunt as a punch in the nose. Just terrific. I came late to the music of Blondie, and it was not something I came across much of before I did the interview. You’ve witnessed so many decades of change and history. We’ve seen music integrated into politics through all these periods. Bob Dylan recently released a 17-minute song on JFK called “Murder Most Foul,” and it has become his first number one. His first number one ever. What are your thoughts about how music has integrated into politics, especially during these election years?

Music has become, in some ways, a tastemaker for politicians and the people..That can be said for Bob Dylan and his JFK recording. “Happy Days Are Here Again” was the theme song for FDR and the Democratic Party for a very long time. You have entertainers who openly endorse candidates and political causes. You also have ones who refuse to have their music used if they don’t like the politician and the policies.

They threaten to stop them or go to court. The intertwining of music and entertainers and politics has reached an unprecedented level. I don’t see it as necessarily a bad thing in and of itself. You have to understand that picking a theme song, not every politician had one until about the 1980s running into the early 1990s, where every politician had to have his own theme song. You’re 88 and continue to remain busy with projects like The Big Interview. We’re used to seeing you at the desk reading the news of the day for so long. Here, you’re able to let loose a bit. But what keeps you going after so long?

I can be dumb as a fence-post about a lot of things, but at least I’m smart enough to know how lucky and blessed I am to be able to continue to work deep into my 80s. I like the work. I understand retirement is for some people. It’s not for me. I like to work and have a passion for this work. This work being journalism and all of its faces. The Big Interview is not the only thing, but it has been a big thing for me to do in these latter years.

I have my social media platform, which I enjoy spending time doing. I have my website called NewsandGuts.com. I have my film projects. I have a passion for this work. This for me, as long as I have my health because health is a very important factor. And God-willing if someone will employ me, I will continue to want to work and will work.

If you would have told me when I walked out of CBS around 14 years ago that I would continue working and working full-time and doing work I like to do for the last 14 or 15 years, I might have had my doubts. It has worked out that way, and I consider myself lucky and blessed that it has. 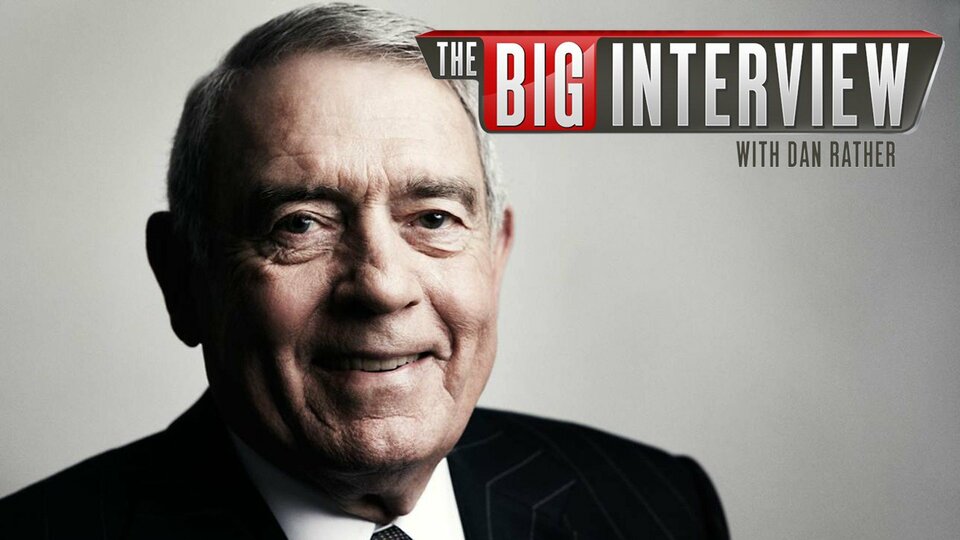 The Big Interview With Dan Rather where to stream

The Big Interview With Dan Rather