If The CW and Ian Fleming fooled around on a class trip to London, you’d have Alex Rider. And now, you will have him twice!

Amazon Prime Video and its free streaming channel IMDb TV have announced the second-season pick up of the teen action series, just three days ahead of its first-season bow here in the States on Friday, Nov. 13. Spy Series 'Alex Rider' Is Coming to the U.S. on IMDb TV (VIDEO)

The spy thriller, based on Anthony Horowitz's books, is already a hit in the UK and Ireland.

Based on Anthony Horowitz’s YA novel franchise, the high-octane and addictive international production stars Otto Farrant as a UK teenager who has unknowingly been trained since childhood to be a sort of Jason Bourne with a curfew. And it kicks ass.

The ensemble cast also includes fan favorite-in-the-making Ronkẹ Adékoluẹjo (Christopher Robin) as Alex’s caretaker, Brenock O’Connor (Game of Thrones) as his best mate and Vicky McClure (Line of Duty) as a shady member of the MI6 offshoot that has indoctrinated Alex. And while yes, it is focused on a teenager, there is nothing juvenile about the series, which is filled with tremendous action sequences, dark themes and stunning visuals that feel straight out of a Bond flick. (Even the first season’s high-school dance storyline takes a grisly turn!) 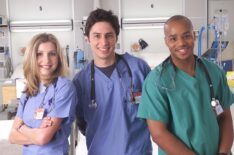 What's Coming to Amazon in November 2020

'Alex Rider,' 'Small Axe,' 'Community,' 'Scrubs' and more are heading to the streamer this November.

Season 1 is based on Horowitz’s second Rider novel, Point Blanc, and Season 2 — which was only a rumor until today — is set to be an adaptation of Book 3, Eagle Strike. The prolific author also serves as an executive producer along with Jill Green, Eve Gutierrez, and series writer Guy Burt.