In fact, we’ll see more of him, as NBC procedural Law & Order: SVU has made Demore Barnes a series regular ahead of Season 22, Deadline reports. Barnes debuted in Season 21 and appeared in six episodes, with his most notable being “Garland’s Baptism by Fire,” in which a pastor at his church was arrested.

“I am honored and so grateful,” Barnes wrote on Twitter to celebrate the announcement Tuesday. “The only thing more incredible than this(our) shows legendary run are it’s [sic] legendary cast & crew.”

SVU showrunner Warren Leight noted, “We can all use some good news: Welcome to the #SVU22 opening credits, @DemoreBarnes.” He added in another tweet, “We are very lucky and grateful that @DemoreBarnes has joined our cast.”

Barnes’ other TV credits include American Gods, Titans, 12 Monkeys, and The Flash. He also guest-starred on NBC dramas Chicago Justice and Med in 2017. (One Chicago and SVU are part of a shared universe.) 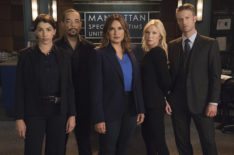 'SVU' Returns to Filming: The Cast Posts From Set (PHOTOS)

Production on Season 22 began in New York on September 14, with safety guidelines in place due to the coronavirus pandemic.