There’s preaching to the converted — and then there’s ranting.

Or, as a title card describes HBO’s Coastal Elites, an inspired quintet of mostly comic monologues by playwright and master satirist Paul Rudnick, “Desperate confessions from people barely coping with the new abnormal.” With a stellar cast of four current Emmy nominees and a past winner, in performances shot in quarantine, these hysterical if uneven showcases have the impact of soul-baring catharsis.

The disease is COVID-19, but Elites‘ symptoms are the exhausted anxiety and free-floating rage of a polarized populace who feel as if they can’t take it anymore, although what choice do they have? The great Bette Midler kicks it off in grand style in the first segment, titled “Lock Her Up,” set in January 2020, a few months before the virus changed everything. She’s Miriam, a high-strung widow who worships TheNew York Times — the print version, mind you. (“Reading The Times online, it’s like having sex with a robot. I mean it’s cleaner, it’s faster, but you can tell the difference.”)

En route to a matinee at New York’s Public Theatre, Miriam has an encounter with an interloper from the opposite extreme of her political spectrum and snaps, landing in a police station. “I hate being like this,” she insists, although Midler makes it clear this woman relishes the opportunity to get these bottled-up emotions off her chest. The film shifts gears, and coasts, in the next vignette, “Supergay,” starring Schitt’s Creek‘sDan Levy as a neurotic L.A. actor in therapy. It’s now March, the early days of the nationwide shutdown, and as he adjusts to sheltering in place, he’s nervously awaiting word if he’s been cast as a gay superhero. And then we’re back on the East Coast, in June, with Insecure‘sIssa Rae as a wealthy Black woman who’s possibly too well-connected to power.

The busy Sarah Paulson(Mrs. America, the upcoming Ratched) shines in her vignette, “Because I Have to Talk to Someone,” as Clarissa, a vlogger from Vermont whose online “Mindful Meditations” provide only the most temporary Zen respite. “Imagine that you’ve not even on Twitter. Or Facebook. Or Xanax,” she counsels, before her pastoral field-of-flowers backdrop goes dark, and so does she. Her composure amusingly shreds as she recounts a family visit to Wisconsin (pre-Kenosha), where she had hoped the pandemic could provide a time out to heal and bond. Not so easy when no one in her midst is wearing masks or socially distancing. Keeping it most real in the final act is the remarkable Kaitlyn Dever (Unbelievable) as a young nurse from Wyoming who volunteers to come to New York to help during the health crisis. Set in April, her wrenching anecdote of service amid unbearable tragedy (“If you start crying, you’ll never stop”) is a stark coda to the occasionally superficial musings in the earlier segments. Her story is a moving, devastating reminder of how impossible it is to stay on the sidelines. 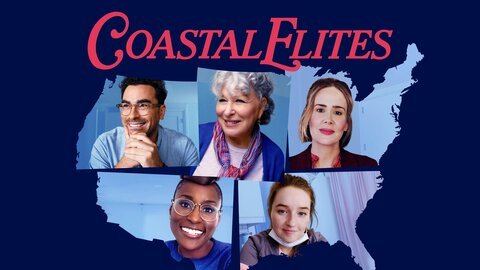