A child’s best friend is his…robot?

Why not? It worked for Will Robinson in the original Lost in Space whenever he needed to be warned of danger. Little Elroy and the rest of The Jetsons would have been lost without their mechanical maid, Rosie. And surely Wesley Crusher of Star Trek: The Next Generation saw Lt. Cdr. Data as an android role model. We all did.

None of which will prepare you for the mythic and eerie grandeur of Raised by Wolves, a wonderfully strange and occasionally terrifying science fiction fable from executive producer and director Ridley Scott (Alien, Blade Runner). It’s set on Kepler-22b, a seemingly uninhabited and not entirely hospitable planet where stoically determined humanoids Mother (Amanda Collin) and Father (Abubakar Salim) have fled a ruined Earth with six human embryos to gestate and raise in this harsh new Eden. Initially told from the perspective of 12-year-old Campion (Winta McGrath), Wolves presents Father as the nicer, more patient android parent, programmed to tell corny dad jokes to these youngsters. Mother is more of a ferocious and protective tigress, so emotionally volatile that she bays at the moon after a tragic setback. Once she reveals her true stripes, surprising even herself, watch out.

For this is more than a story of survival. There’s a provocative philosophical undercurrent to Wolves as well, which becomes apparent when Mother preaches against the sort of religious belief and conflict that ultimately destroyed their home planet in a holy war: “We will never advance unless you resist the urge to seek solace in fantasy.” Good luck with that.

Her family is only human. And when devout travelers, the last remnant of mankind, arrive aboard a vessel named the Ark of Heaven, led by a warrior (Vikings‘ Travis Fimmel) who’s also more than he appears, young Campion’s exposure to others like him leads him to question his upbringing. As for Mother? She literally flies into defensive action, a sight that’s as magical as it is menacing, with some very gruesome results.

“Stories can be great fun,” Mother insists to a group of newly arrived children, who only know from scripture. And when she begins telling them about the Three Little Pigs, they quake in fear, knowing a Big Bad Wolf when they see one. Raised by Wolves may be too self-important to qualify as fun, but there’s fascination in its visual wonder, mystery and danger. 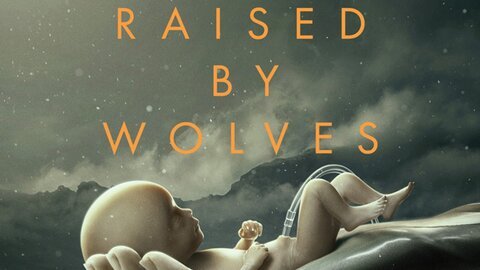 Raised by Wolveswhere to stream