Ric Flair is widely regarded as the GOAT of pro wrestling, his name synonymous with the industry. Even after several near-death experiences, you can’t keep the “Nature Boy” down. The two-time WWE Hall of Famer remains busy, involved in several business ventures.

We’re talking Woo-rific Cameos, pep talks before big games, appearances in rap videos, an upcoming animated series and being featured in the Celebrity Slots app. The free-to-play mobile game offers the unique opportunity for fans to win gift cards, Flair branded apparel and an autographed DVD copy of his ESPN 30 for 30.

“I probably feel like right now I’m recognized more as a crossover demographic type guy,” the young-at-heart star said. “Whether it be the pop culture [stuff], wrestling, motivational things for sports teams like the Falcons or the University of Georgia. I’m sure I’ll do something for Florida, Georgia or Auburn this year. I have stepchildren at all three…For me, it’s all about having fun right now.” On top of all this, the consummate performer returned to Raw in support of Evolution upstart turned top name Randy Orton. Flair, who technically retired from the WWE ring in 2008, is happy to get involved whenever he gets the call.

“Some people are just happy to go home and sit on the sidelines,” Flair said. “I love to always be doing something. I had a great time when I was on Raw a couple of times with Randy. To be 71 and even be on TV and be involved with WWE, that’s huge for me.”

“The Naitch” stood still just enough to assess today’s WWE locker room and explain why he remains a fan after all these years. 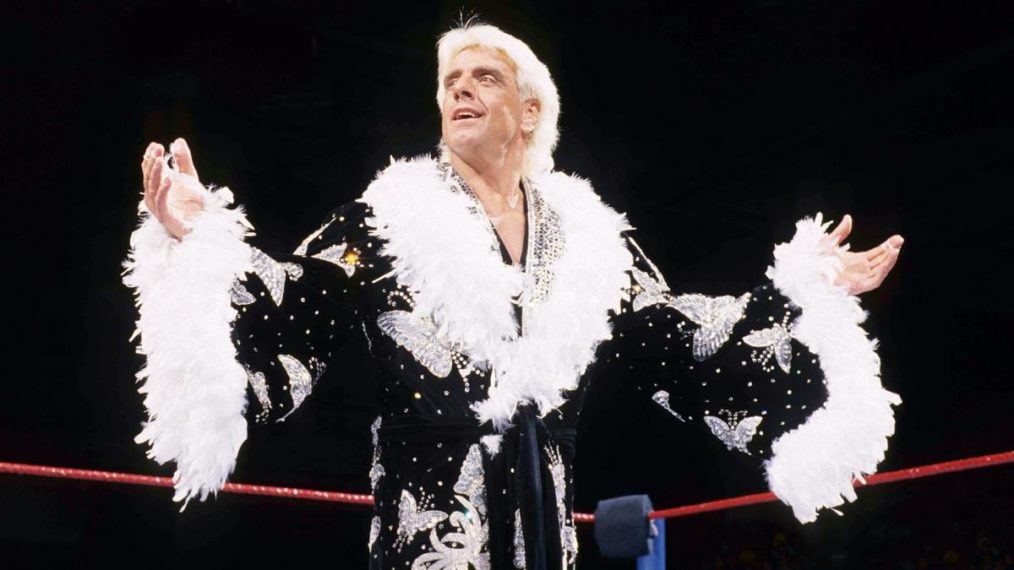 What do you look for in companies that are interested in using your likeness?

Ric Flair: My agent spends a lot of time looking at demographics and stuff like that. Any time you have an opportunity at a high level to interact with your fan base, like with Celebrity Slots, [is interesting]. The people who helped make you who you are today, even though they didn’t actively participate, they’re the ones who bought tickets. They follow me now on social media, which we all learn is such an important thing in life these days.

I see you doing Zoom calls. You have this Celebrity Slots app, social media. How tech savvy would you say you are?

You want me to be honest with you? I’m as well versed as my stepdaughter, who does every bit of it with me. Someone who is going to be an FBI analyst. I can barely turn my phone on and off. I’m not computer literate. Nothing. If this Slots app wasn’t easy and easy to download [I couldn’t do it]. You know, I went to high school 13 years [laughs]. WWE has such a young crop of emerging talent. How has it been to come back and lend your wealth of knowledge?

The kids treat me with so much respect. It’s nice. I never feel any level of discomfort. I just feel like I’m one of them. I watch, so I know what I’m talking about if someone asks me a question. I don’t miss any of the shows. So if a question arises while I’m there, I can answer it intelligently and at least give my opinion. I don’t walk in there as a stranger of the product. I walk in there as a fan. I’m just thrilled and amazed at how hard they all work. Nothing has changed when it comes to that part of the business.

There is no substitute for hard work, whether there are fans in attendance or not. They give 120 percent. This past Monday night they had a tremendous show. I don’t care what the ratings say. I think the pandemic has hurt a lot of things. The wrestling product they gave out Monday night was great, which is what they do every week. I watch NXT too. Raw was a hell of a show. Randy Orton’s interview to open it with Sasha and Asuka having a great match. Nia Jax and Shayna Baszler are back out there now. Seth [Rollins] and Drew [McIntyre] and Dolph [Ziggler]. It’s a hell of a show. They have a lot of talent.

One of the things that was fun for me is to see you onscreen interacting with your future son-in-law, Andrade.

I think he is one of the top five guys in the business. He is a great kid. I hope they continue to push him and [Angel] Garza. I like Garza a lot. I think Zelina [Vega] does a tremendous job when given the opportunity to talk. She also looks like a million bucks. She knows how to be a heel. Both those kids Angel and Andrade can work. The sky’s the limit for them. It all depends on the direction the company goes in, but they’re really good. They’re solid. You can’t see through their work. Manny [Andrade] is really good. As big as he is, he can do what Rey Mysterio can do. I have a ton of respect for all of them.

You mentioned how good the shows have been, but the ratings haven’t reflected that. What do you think the disconnect is? What can WWE can do to turn things around?

I’ve been watching wrestling for a long time. I don’t pay attention to the competition. So I’m not sure what Raw or the other shows are really up against. I think it’s the whole thing right now. Believe it or not, I do think sitting at home watching, it is fun to watch in front of a large audience. That can affect it. But in terms of the kids working hard, come on. They’re busting their ass. I can’t say enough about that. They are also missing some key players but keep marching on. That’s what successful people do. They don’t make excuses.

They have that good work ethic that it will come back around. I don’t think anyone is taking it personal. It’s what is going on right now. Vince McMahon, WWE, will bounce back bigger and better a year from now. The pandemic has stopped a lot of things. It has given a different perspective on a lot of things, but it’s not due to their attitudes or level of performance.

Among big names that have been enlisted for Celebrity Slots along with you is Dennis Rodman. His run in WCW was touched on during The Last Dance. How do you think he would have done in pro wrestling had he continued on?

That was never going to happen. Dennis just has fun. He is just a great guy. I can’t say enough about him. We’ve been friends for 20 years. I talk to him at least once every two weeks. Their Carmen Electra and Madonna thing really pissed me off. The best part of The Last Dance was the picture of Rodman and Madonna, though. And Michael [Jordan] saying you just can’t let Dennis go to Las Vegas. That’s the truth. Having been there with him, I know what that means. Everybody wants to jump on Ric Flair. Hanging out with Dennis is a lot of fun, too. Speaking of docs, I’ve heard rumblings of some other projects about you.

A&E is looking at me. I don’t know enough about it to comment. ESPN might do something else with me. I think the 30 for 30 on me was voted the most popular. They might do something more. Networks are always looking for new programs. My life has changed so drastically, [since] my illness in 2017. It will mark three years since [rupturing my intestine] on August 11. How my life has changed in the last three years is amazing. So people are interested in that. I’m just happy to be here. People say to me they’re lucky to have me. I’m lucky to have them and companies like Celebrity Slots selecting me to be part of things. They don’t approach everybody.

When you look at how you came back with Randy Orton, one can argue there are newer talents who could use the benefit of a Ric Flair rub. Do you have any ideal scenarios you could picture if you get the WWE call again?

The thing with Orton is it’s a real life story. His dad and I have been friends since the ’70s. We probably started around the same time. I watched Randy grow up. I was there the day he came up with Dave [Bautista] in Evolution. I don’t know if I would have that same impact on a lot of people. I certainly would love the opportunity, but I think it would have to be one of those scenarios. I’m trying to get me to manage Randy against [Drew] McIntyre [at SummerSlam]. I don’t know. I haven’t heard back, but it’s not because I’m not trying.