Netflix has unveiled its first look at Season 2 of its buzzy series Dead to Me with a new teaser trailer and key art featuring stars Christina Applegate and Linda Cardellini.

Returning with new episodes on Friday, May 8, Dead to Me picks up where we left off — in the aftermath of that bloody backyard incident, from which James Marsden’s Steve definitely won’t walk away. In Season 2, Jen (Applegate) and Judy (Cardellini) will continue to struggle to keep their secrets buried.

When a surprising new visitor arrives in town, and with Detective Perez (Diana Maria Riva) hot on their trail, the ladies will take drastic measures to protect the people they love as well as each other — no matter the cost.

In the newly released key art, Jen and Judy are seen sitting at the bottom of the pool with bloody glasses of wine, no doubt a callback to Season 1’s final moments. The even darker second season will raise the stakes as Jen and Judy’s friendship grows deeper and the traumas that bond them loom larger than before. “Grief does some weird s**t to people,” Applegate’s Jen says in the teaser. Find out just how weird things will get by tuning in this May, and don’t miss the trailer below.

Dead to Me, Season 2 Premiere, Friday, May 8, Netflix 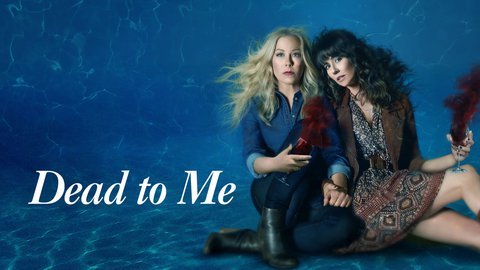