Amazon’s new sci-fi drama Tales from the Loop seeks to unlock the mysteries of the universe with the help of a mysterious underground system called the Loop.

While vague in concept, the series highlights various stories about the people living above the Loop and the unusual occurrences they encounter in their daily lives. Rebecca Hall’s Loretta is among the individuals at the center of these Tales. We want to know which Netflix, Hulu, Amazon Prime Video and Apple TV+ shows you're looking forward to watching this month.

A physicist driven by events from her past, Loretta works to uncover answers that evade her. Below, Hall fills us in on the Loop, the show’s overarching themes, her character and much more.

The Loop is really mysterious. We know that it serves to unlock the mysteries of the universe, but what else should viewers know about it before diving into this series?

I think it’s probably better to know absolutely nothing. There are elements about the show that are deliberately mysterious and it asks you to accept that there are things in life that defy explanation. What’s really fascinating about it, and one of the things that really drew me in, is that often there are shows that have fantastical elements that are very plot-driven and the reason why you’re watching it is to enjoy what’s fantastical and how the story unfolds in that regard. In [Tales from the Loop], I think the fantastical is used as a sort of tool to tap into something much more grounded about people and what it is to be human that is actually entirely real and not fantastical. I think that’s really exciting. The Loop is an enormous particle collider that’s also an eclipse, which is a thing that landed out of nowhere.

It’s grounded in a certain amount of science facts — the idea of particle colliders — which is a little mind-blowing. If you ask a physicist if they believe in time travel, they say yes, which I don’t really understand and would never presume to. You realize that the end point of physics and math and all the things that we think are very scholastic and classroom-based are actually entirely existential and theoretical and much more mysterious than we give them credit for. I think, have an open mind is probably the thing to go into the show with. Each episode deals with overarching concepts such as motherhood, grief, loss and reflecting on mortality. What other notes would you say the show hits?

Well, I think the whole thing is about time, honestly. I think, time as a concept that we’ve invented and time as a thing that marks what’s difficult about being a person, which is that things change. Also [what’s] great about being a person — bad things get better, the better things have the potential to get worse. If it wasn’t for time, then relationships wouldn’t end and we wouldn’t be abandoned, [but] also relationships wouldn’t begin and ultimately we wouldn’t die. Or get old or anything.

Loretta is a physicist, but what else should viewers know about her?

She’s a woman who’s incredibly obsessive and driven by her work, but also there’s an explanation for that, because there is an event at the center of her life that means that she has this compulsion to control and explain the world around her. Sometimes it’s a bind for her, this sort of desire to throw everything into her work but also a need to be there for her children and be good with her family, which is hard for her. The ways in which she doesn’t see that she’s failing at that. And that for her is also — for reasons that you will understand after watching Episode 1 — the biggest failing that could possibly be, to not show up for her kids. I found it incredibly moving. I just feel like her whole characterization is bound up in this huge acts of abandonment at her core, and she’s quite hard and strange and not particularly relatable and big-brained and weird, but also she’s utterly sympathetic and relatable because you can see how hard her life has been.

How would you describe the storytelling method of Tales from the Loop?

A lot of the episodes stand alone, honestly. There’s a clever thing that goes on, it gives you just enough information and then also leaves you wanting more and also sort of structures it like a puzzle so you can start to find connected tissue between all the stories. At the same time, every episode deals with a different person in the Loop.

The Loop is located in a small Ohio town, but when is all of the action taking place?

It is actually specific and it’s also not. We all knew what the timeline was, Loretta was born in the sort of late 40s, early 50s, then it’s late 70s, early 80s, but there’s also a lot of liberties taken with it. Also, there was a desire on the part of Nathaniel Halpern, the showrunner and also the art department, to not really situate it too specifically anywhere. It’s sort of its own universe, it exists outside of a place or a time, but it has enough familiar elements to make you feel that sort of sense of the uncanny.

The series is based on art by Simon Stålenhag. How did that, as well as the visual effects, impact your approach to this role and show? There’s a lot of visual effects involved in the show’s story telling.

It was more realized than other things that I’ve worked on of this ilk. Things were really built on this one. I saw the Loop — it was a set — and the outside was the outside pretty much. There was real snow and when there wasn’t enough snow they cleared out all the iceboxes of every deli in like a 20 mile radius and made real snow. There was a lot of attention to real detail in a way that you don’t always see, so that was exciting. I saw the robots, I knew what the world was going to look like, but we were also all very much informed by the art. I think that you look at the art and there’s this sort of sparse, spare, restrained quality to it, and I think that did inform all of the acting styles, all of the tone of the piece, I think that it definitely helped build a cohesive world. 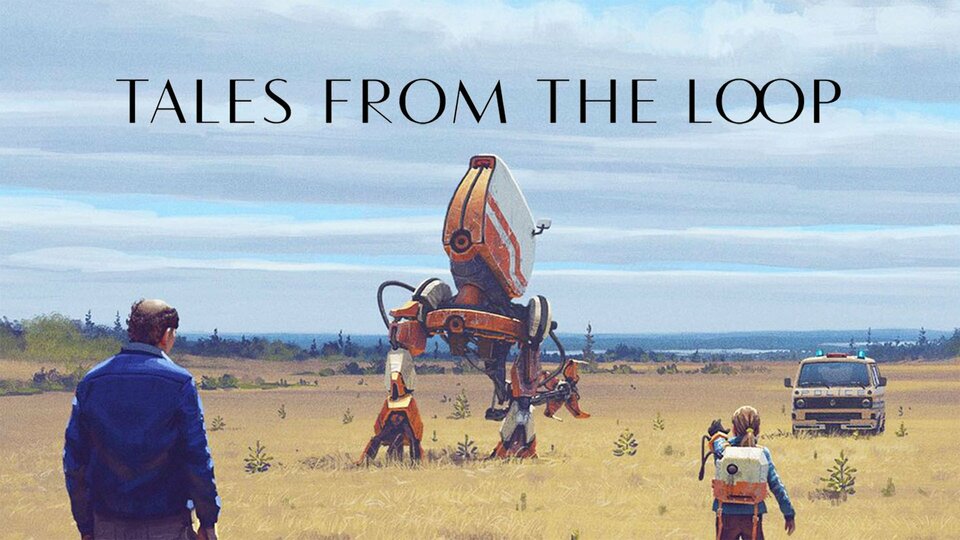 Tales From the Loop where to stream

Tales From the Loop