[Warning: The below contains MAJOR spoilers for Season 6, Episode 16 of NCIS: New Orleans, “Pride and Prejudice.”]

Agent Lasalle returned — and died again — in the second of Sunday’s episodes of NCIS: New Orleans.

No, the CBS procedural didn’t suddenly cross over with a CW show like Supernatural or even the Arrowverse with its Lazarus Pits. Instead, a man posed as Lasalle to free a grifter from prison, and it was only after, while processing his paperwork, that anyone realized what had happened. 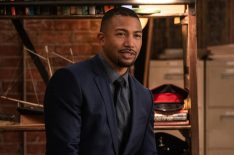 But why did this man, Rhett Howard, choose to impersonate the team’s fallen friend? “Simplest answer is that this guy looks a lot like Chris,” Pride (Scott Bakula) surmised. There was no deeper meaning behind it.

Because Rhett chose Lasalle’s identity, the team looked into why he broke Etta out with only 15 days left on her sentence. Her sister, Kristen, had been executed and the case was cold. Furthermore, Kristen had been photographed with Vice Admiral Hicks (Linden Ashby), who then resigned a few days later.

As Hicks revealed to Carter (Charles Michael Davis) and Sebastian (Rob Kerkovich), he only had one drink at that event, and when he woke up, she had photos of a situation he didn’t remember being in. Rather than give her what she wanted — details and the bidders for an upcoming construction project — he resigned. The fake Lasalle was soon found executed, and once they tracked down Etta, she revealed he was his sister’s fiancé. They both wanted the man responsible for Kristen’s death, the man who hosted the event, Jack Hardin, to pay. (She hadn’t been able to deliver the information he wanted.) He made his money in shady, scandal-adjacent ways. Hannah (Necar Zadegan) went undercover with Etta to get the evidence needed to arrest him.

And while Carter may not be anything like Lasalle — nor does he want to be, as he made clear in his debut — he did offer a somewhat sweet counterargument to Tammy’s (Vanessa Ferlito) anger about her friend’s identity being stolen. “You could also see it as your friend reaching out from the great beyond to help us stop a vicious murdering jackass,” he suggested. If Rhett hadn’t impersonated Lasalle, the team wouldn’t have gotten involved. Ignoring the fact that Rhett used their dead friend’s identity to break someone out of prison, it is sort of a nice way to think about it.

Still, one thing’s for certain: this case proved that NCIS: New Orleans isn’t going to forget what Lasalle did as an agent or meant to the team, his family, or the show.