‘Ray Donovan’: Ray Returns to the Church … But Has He Really Changed?

WIll God take away the pain? Ray Donovan ended last season with its title character—a badass Hollywood “fixer” played by Liev Schreiber—going into a Catholic confessional and admitting he murdered the priest who sexually abused him as a child. When the series returns with a six-month time-jump, Ray is trying to clean up his act, lay off the booze and be a better husband and father. And he’s going to church again in an effort to get a handle on all his hurt, shame and rage.

“Ray feels about Catholicism the way many abuse survivors do—he’s fearful and has a hard time trusting the institution,” Schreiber says. “But he still has faith and he’s looking to God for the bigger answers.” Ray will get spiritual counseling from an unlikely source—a world champion boxer named Hector Campos (Ismael Cruz Cordova), who was also molested in his youth by a Catholic priest. “Hector becomes Ray’s mentor, and a deep emotional connection develops between the two men,” Schreiber says. 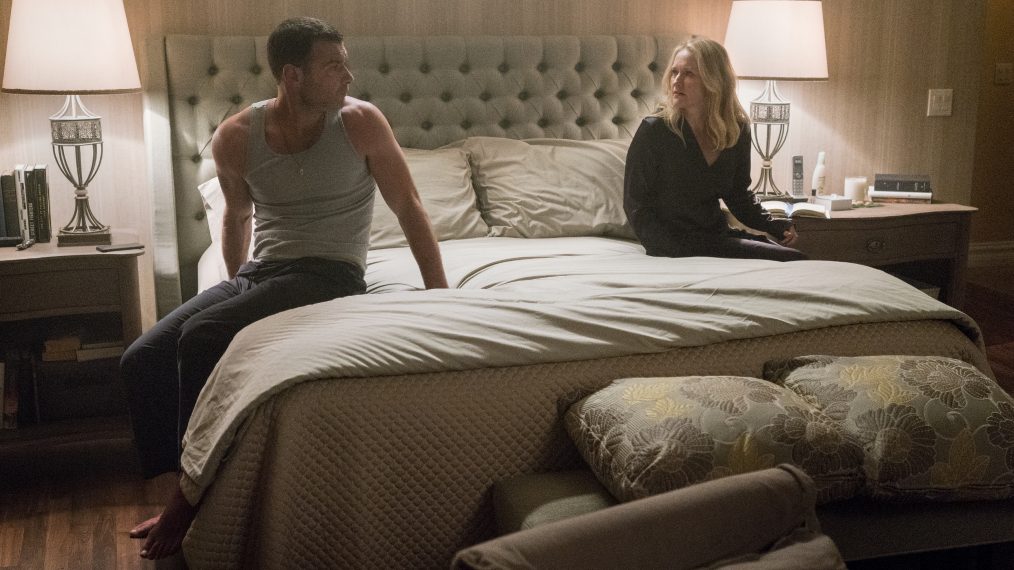 But, this being Ray Donovan, there are of course seedy twists. “Hector and his older sister Marisol (Lisa Bonet), who has always been his savior and protector, are hanging on to a dangerous secret,” says executive producer David Hollander. “It’s a very strange mother-son kind of relationship, full of complications.”

Meanwhile, Ray’s own family of misfits and screwups is looking downright cozy and functional. Eldest brother Terry (Eddie Marsan), who suffers from Parkinson’s disease, is still living under Ray’s roof, and this season stepbrother Daryll (Pooch Hall) will move in as well. Plus, a baby is on the way, courtesy of brother Bunchy (Dash Mihok), who also was molested by the priest Ray killed, and his wrestler wife, Teresa (Alyssa Diaz). “This new life means so much to the Donovans,” Hollander says. “It gets them thinking a lot about family legacy—who they were, who they are now, who they want to be.” Ray even manages to cajole his teen daughter, Bridget (Kerris Dorsey), back into the fold. She ran off last year after Dad beat the crap out of the schoolteacher she was trying to bed. “Ray will have to earn Bridget’s return,” Hollander says, “but she’s eager to try this new Donovan family normalcy on for size.”

So, weirdly, is her psychotic grandfather Mickey (Oscar winner Jon Voight), who is on the lam from the police and living under a bogus name in Nevada. “Mickey and Ray come together in a surprisingly positive way,” Schreiber says. “After all that’s gone bad between them, Ray wants to understand his father and get closer to him.” Not easy, considering Ray blames Mickey for being a clueless, loveless, disinterested parent, and that’s what left an opening for the family priest to prey on the Donovan boys.

The biggest benefactor in this saga of the new-and-improved Ray is his brittle, battle-worn wife, Abby (Paula Malcomson). “Abby has lived years in abject loneliness,” Malcomson says. “She had so little in her life that she tried to connect with the rich women of Bel-Air or the ladies in her yoga class, and she’d always end up getting mad and cussing them out. Now that Ray’s shaping up, she has a purpose. She’s really into being the Donovan matriarch.” Ray is a chronic philanderer and there’s no reason to think he’ll change, but Abby is in a new place with that. “She wants to be treated like Ray’s partner and equal rather than a f—ing idiot,” Malcomson says. “She wants no more lies.” But she still wants him to be her big, bruising superhero. “Abby loves the mythic part of Ray—the part of him that gets daring, amazing things done,” Malcomson says. “The last thing she wants is a man who’s going to sit down with her every morning and watch The View.”

But there are some things even the “fixer” can’t fix. Abby will get shocking medical news that involves a “complicated and confusing diagnosis,” Hollander says, “and it leaves her with the difficult decision of whether or not to have treatment. But it only makes this new bond between Abby and Ray even stronger.” Through it all, “Ray has the Russian and Armenian mobs on his tail, so he’s a busy boy,” Schreiber says. “And he still needs to be the breadwinner.” Embeth Davidtz (Mad Men) joins the cast as Sonia Kovitzky, a Beverly Hills art dealer who wants Ray to bribe the Feds so she can get back some confiscated paintings.

“Sonia is initially a client, and then God help us,” Hollander says. “Business like this really calls into question Ray’s new path. How can you become a more spiritual person if you help people bury their problems and cover up their scandals? How do you evolve when your job is all about hiding the truth?”