[WARNING: The following contains MAJOR spoilers for The Walking Dead Season 10 episode 2, “We Are the End of the World.”]

Just when you think the Whisperers couldn’t get any creepier, a flashback episode proves just how twisted these dead-worshippers really are.

Told in dual timelines, “We Are the End of the World” reflects on Alpha (Samantha Morton) and Beta (Ryan Hurst)’s fateful first encounter while also chronicling their quest to get more “guardians” in the present. The result is a gripping, twisted episode that shines a light on the surprising humanity within the Whisperers as well as revealing Alpha’s demented, unstable mind and conflicted values.

There are two timelines going on in this episode, seven years apart. In the past, seven years earlier, Alpha and Lydia (Havana Blum) take refuge from the dead in a mental institution. They run into a man inside—Beta, though he doesn’t yet have that “name”—who allows them to stay for one night.

Alpha cleans Lydia up and gets her ready to go to bed, but when she offers her daughter a stuffed animal, Lydia says she doesn’t want it. “I want to be more like you, mama!” she says. Alpha reacts with joy, saying she’s waited a long time to hear Lydia say that… but that if she doesn’t become like her, she’ll have no choice but to leave her behind. 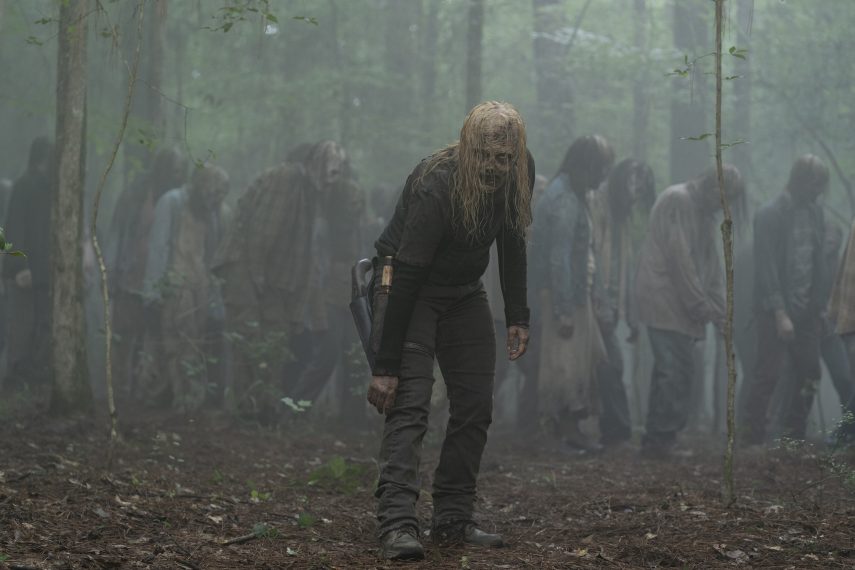 Alpha then walks around, running into some walkers on the way. When they trap her, Beta comes to her rescue and they take down the dead together. “I like killing with you,” Alpha remarks. She proceeds to gut the walkers and place their entrails in buckets, and she coins him “Mr. B,” and herself “Ms. A.”

She hauls the buckets back to her quarters, and unbeknownst to her, Lydia covers herself in guts and sets out into the institution. When she discovers Lydia is gone, she searches the building and arrives in a room with a bunch of photos with the faces scratched out—one is clearly Beta. Beta shows up and nearly kills her for going where he told her not to go, and he is distraught when Alpha kills one specific walker. Lydia’s arrival, and the child’s insistence that Alpha was “trying to save him,” spares her. In the present, the quest to corral more “guardians” leads to a conflict between Alpha, Beta and two sisters. One of the sisters is the mother of the child who was left in the field at Hilltop—the baby Connie saved. During one of their Whisperer outings she remembers her child and has a breakdown in the middle of a herd: Her rule-following, through-and-through Whisperer sister (played by Thora Birch) and Beta are forced to kill the dead to save her.

Obviously, this is a violation of Whisperer code punishable by death. She’s very nearly killed when she returns to camp, but Alpha intervenes, telling the woman to meet her, alone, in a cave. When she does so, Alpha first tells her to remove her mask, then to kneel. Alpha squeezes the sides of her head until her screams are loud enough to be heard throughout the camp, but then, instead of killing her, she shows her mercy. That wasn’t the brightest move on Alpha’s part. When the Whisperers go out the next day to get some more of the dead, the falling satellite disrupts their plan… and so does the “saved” sister, who, after seeing a walker wearing a baby carrier, has another breakdown and rushes at Alpha in an attempt to kill her, clinging to her and screaming. The other sister tears her off of Alpha, and while they make sure Alpha is okay, the mother-sister is devoured. Plus, the casts of 'The Expanse,' 'Snowpiercer,' 'Lost In Space,' and more pose.

Upon returning to camp, Alpha gives the remaining sister the honor of becoming “Gamma,” since according to her, “we are strongest when we kill our own blood.” Alpha has been using that line to maintain control of her people, it seems, since she lied to them and told them she killed Lydia. We Are the End of the World

It appears Alpha is struggling with the “loss” of her daughter, and that conflict comes to a head when Beta seeks her out and finds her at their old camp, standing by a makeshift crib and holding Lydia’s stuffed animal. Beta was already questioning Alpha and wasn’t too pleased about the whole “Gamma” thing, and this puts him over the edge. He rages at her, saying, “she’s never coming back, no matter how much you wish for it.”

Fans got a glimpse at the series starring Alexa Mansour, Aliyah Royale, and Nico Tortorella at NYCC.

Alpha, holding her head and barely clinging to whatever threads remain of her sanity, tells him she couldn’t kill her child. After begging him not to tell anyone that Lydia’s alive, she says Lydia was dead to her when she was born, because she wasn’t like her. As Alpha tears down the crib and everything else, she continues screaming, “She’s not like me!” As the episode ends, in the past, Alpha offers “Mr. B” the chance to come with her and Lydia. He says he can’t leave the walker she killed, and she says he doesn’t have to; He then cuts into the man’s face, making the mask he still wears. “I am the end of the world,” he says, and Alpha replies, “We are the end of the world.”

In the present, Alpha and Beta make up, it seems, by holding hands and reciting vows about fearing nothing and loving nothing. They then go to check out the satellite, and Alpha sees Carol standing in their territory. We Are the End of the World