How Did ‘Chicago P.D.’ Write Out Antonio? And Who Killed Kelton? (RECAP)

[Warning: The below contains MAJOR spoilers for the Season 7 premiere of Chicago P.D., “Doubt.”]

Chicago P.D. ended last season with a couple major cliffhangers, and at the very least, the Season 7 premiere needed to explain Antonio Dawson’s (Jon Seda) absence moving forward and revealed who killed Kelton (John C. McGinley). It did both.

Voight (Jason Beghe) looked mighty guilty driving away from Kelton’s house, a.k.a. a crime scene, in the Season 6 finale. Jay (Jesse Lee Soffer) even thinks his boss may be guilty in “Doubt.” “Earlier today, Voight said he was going to see Kelton to do what needs to be done,” he tells Hailey (Tracey Spiridakos).

Did Voight do it? And where’s Antonio? Those are the two big questions for the hour. Voight tasks Ruzek (Patrick John Flueger) with looking for Antonio. His place is a mess, and when Ruzek finds his friend’s car, it’s at his sponsor’s house. His sponsor explains that Antonio checked into a hospital, but couldn’t take it. They were talking until 4:30 a.m., and when he woke up, Antonio was gone.

Jay later learns that Voight has been keeping quiet about what he was doing the night before to protect Antonio. He called when Voight was on his way to Kelton’s. He was in bad shape, and Voight took him to an off-the-books clinic. But was that before or after his visit with his sponsor? It sounds like it was before, if the hospital the sponsor mentioned is the clinic Voight took him to.

So, who killed Kelton if not Voight? It was Kate (Anne Heche), and once Voight knows that, he insists on taking it from there on his own. He goes to Kate’s and asks her why she did it. Did he renege on his deal after throwing her under the bus with the serial killer? Did he laugh at her when she reminded him what she sacrificed so he could be mayor and did she get angry? “If you’re going to take me down for murder, you better have more than a theory,” she warns him.

But he has evidence. “He was going to ruin Chicago,” she says. “I did what I had to do.” Jay watches Voight leave Kate’s alone and suspects he’s helping her get rid of evidence and leave the country. He insists on going inside, and he and Hailey find her about to kill herself. When they bring her in, Voight gets in Jay’s face. “You went behind my back,” he says. “I gave her a chance to get her affairs in order, to do what she needed to do. I was setting up a containment.” 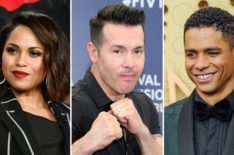 “I said I would handle it, didn’t I?” Voight continues. “Me, not you. It was her choice, not yours. She wants to put a bullet under her chin in full blues, that’s her right. It’s her call. If you don’t trust me, Jay, the way I do business concerns you, then get the hell out.”

There’s no way that’s not going to get much, much worse before it gets better. How will Voight and Jay’s problems affect them on the job this season?