Hear that sound?! It’s the wail of sirens, which means our heroic emergency responders are on the way to save the day on 9-1-1.

The drama’s third outing keeps up the frenetic pace of seasons past: “We have our whole complement of crazy, exciting, heart-in-your-throat rescues,” says exec producer Tim Minear.

He jokes that September is the “unluckiest month” for residents of 9-1-1‘s Los Angeles, where a massive earthquake hit in last year’s premiere and a tsunami crashes in the final moments of the opener this year. Here are the three crises that get things rolling.

“We open with a classic L.A. moment: a high-speed chase on the freeway,” Minear reveals. Switcheroo! It’s the guy behind the wheel who calls for help because his accelerator is stuck. While the scared teen stays on the line with 911 operator Maddie Kendall (Jennifer Love Hewitt), Sgt. Athena Grant (Angela Bassett) of the LAPD follows in pursuit. She also enlists LAFD’s Station 118 — where her new husband, Capt. Bobby Nash (Peter Krause), works — to help stop the vehicle before anyone dies. 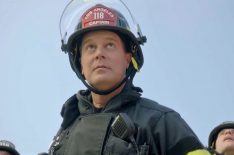 Watch as a summer day turns fatal in the blink of an eye.

Later, during a routine traffic stop, Athena encounters a woman driving with a newborn who is starting to turn blue. Trouble is, Athena quickly realizes the woman did not recently give birth. “It turns into a very bizarre, almost kidnapping case,” teases Minear.

Firefighter Buck (Oliver Stark), badly injured last season in a bombing incident, isn’t back on the job yet, so he has taken colleague Eddie’s (Ryan Guzman) young son, Christopher (Gavin McHugh), for a day at the Santa Monica Pier. The Ferris wheel fun is interrupted by a giant tsunami, which slams into the shore, flooding the coastline. Buck is hanging on…for now. “He is stranded,” says Minear, who reveals a new hero rises in the form of a firefighter named Lena. She’s played by recurring star Ronda Rousey, the wrestler and MMA athlete.

Over the next two episodes, floodwaters move a mile inland, turning the show into a mini disaster movie. Shooting took place at Mexico’s Baja Studios, where 1997’s Titanic was filmed. “We built L.A. streets in giant tanks, flooded them with ocean water and put our actors in there,” Minear says. As for their characters, he adds, “Some will live; some will not.”