Comedians in Cars Getting Coffee (streaming on Netflix): Jerry Seinfeld really gets around. And in such good company. A new season of his caffeinated conversations with comedy greats puts Jerry behind the wheel as he talks shop with such impressive passengers as Eddie Murphy, Ricky Gervais, Seth Rogen, Matthew Broderick, Jamie Foxx, Martin Short, Bridget Everett, and Saturday Night Live’s Melissa Villaseñor.

Also on Netflix, which is all too happy to cannibalize its best product with programming overkill: the Fab Four of Queer Eye return to Kansas City with more in mind than searching out the best local BBQ; and a new season of the inspirational sports docuseries Last Chance U is back with the junior college football program at Independence Community College, which hopes to atone for a disastrous season. It Gets Personal in the 'Queer Eye' Season 4 Trailer (VIDEO)

The UnXplained (10/9c, History): Let William Shatner explain the most cosmic of mysteries to you — if he can. The Star Trek icon hosts the latest quasi-reality series investigating the paranormal, from Earth’s ancient cities to ETs in the sky and weird rituals we may wish we’d never gotten to the bottom of. The series opener, themed around the notion of whether places can truly be evil, includes the story of a group of Russian students who went missing in the Ural Mountains, later discovered with only their booties on and their tongues torn out. William Shatner Looks for Answers to Inexplicable Mysteries on 'The UnXplained'

Killjoys (10/9c, Syfy): The final season of the rollicking outer-space adventure begins with bounty hunter Dutch (Hannah John-Kamen) coming to an alarming realization: that the alien they call The Lady has altered everyone’s memory. So she’s not really married to Johnny (Aaron Ashmore)? 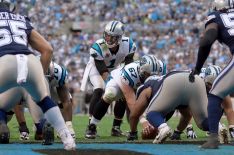 Inside Friday TV: Amazon Prime Video’s fourth season of the sports docuseries All Or Nothing now follows the Carolina Panthers, led by flamboyant quarterback Cam Newton, through the highs and mostly lows of a turbulent season. … With the actual anniversary of the Apollo 11 moon landing looming, BBC America explores Wonders of the Moon (10/9c), using stunning imagery to reveal how the moon influences living things on Earth, including the breeding patterns of coral reefs in the South Pacific (timed to sync with moon cycles) and an annual mid-autumn moon festival in Hong Kong. … Carla Gugino as Jett (10/9c, Cinemax) reconnects with a fellow con-artist she met on a diamond heist, teaming to steal a vintage Mercedes from a lakeside estate. What could go wrong?

All or Nothing where to stream

Comedians in Cars Getting Coffee where to stream

Jett where to stream