Take a journey along the twists and turns of the canine family tree to meet the most dangerous and wondrous wild dogs in the natural world and learn how they eventually went on to become much-loved pets like Labradors, bulldogs, mutts and more. Hosted by biologist Patrick Aryee, Amazing Dogs travels the world to study all 34 extraordinary canine species – from the Arctic fox to South America’s maned wolves and everything in between. Aryee examines these wonderfully varied creatures and discovers how, by harnessing their wild instincts, dogs helped change the course of human history.

We are transported from the jungles of Brazil to the deserts of Africa and onto North America’s prairies to meet the most incredible canines known to man. The premiere episode, Man’s Best Friend, sees Aryee meet the fastest, strongest and most unusual looking domestic dogs on the planet – all descended from the wild gray wolf.

In the Mongolian wilderness, we find the Bankhar, a native dog that protects livestock from predators; then, it’s to the deserts of the Middle East to meet the Saluki – speed-demon canines that can reach up to 40 mph. Later, Aryee heads north on a dog-sledding adventure with the sturdy and strong Inuit Sled Dog, and while heading back south, he finds the loyal Newfoundland working among fishermen and the Cattle Dog riding alongside cowboys.

Subsequent episodes of Amazing Dogs are: Aryee travels to the Americas, where the first canines evolved more than 30 million years ago. Starting with some playful but clumsy wolf pups, he discovers the traits shared by all members of the wider canine family and reveals why dogs are considered to be more intelligent than solitary predators like cats.

Following their evolutionary journey, he meets super-furry foxes emerging from a snowy den, comes face-to-face with a pack of fully grown wolves and, in South America, tracks down the tallest wild dog on the planet, standing at over a meter high and known as a “fox on stilts.” Charting the final stage of the dog’s global conquest, Aryee ventures out of the Americas into Asia and Africa, following the canine’s centuries-long journey across continents. From red foxes performing great leaps to catch mice deep beneath the snow to bizarre raccoon dogs that steal eggs from birds’ nests – this is a story of canine cunning.

In Africa, dogs would team up to take on the Big Cats and become the most successful large predators on the savannah. Then, on Namibia’s Skeleton Coast, an extraordinary encounter between a Jackal and a huge brown hyena shows how canines used brain over brawn. 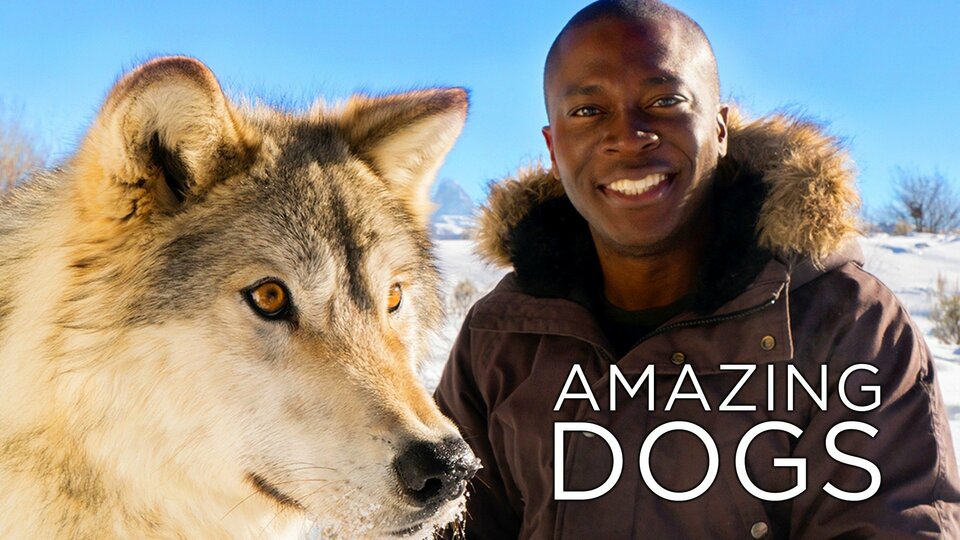 Amazing Dogs where to stream