When it comes to making the important decision of what to wear on your wedding day, hardcore pro wrestling legend Mick Foley might not be an obvious choice to help. However, Heather Reicher found her WWE Hall of Fame friend an important part of the process as chronicled in the Season 17 premiere of TLC’s Say Yes to the Dress.

Reicher, also known as “Kid Cadet” among independent wrestling fans and for hosting comic-con panels across the country, found Foley helped push her in the right direction.

“I went with the idea of what I really wanted,” she said. “Though I was also pretty flexible, but I knew I wanted something unique and different because at the time I still had the pink and purple hair. I wanted something that would go along with that. I didn’t want to be the typical bride because I never felt like the typical bride. Mick surprisingly had a very good eye.” 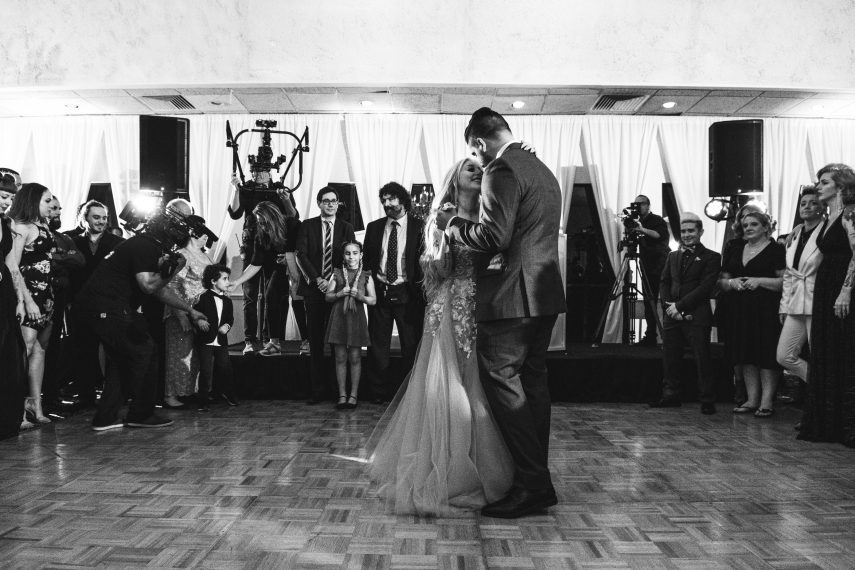 Reicher, also a singer, applied for the long-running TLC show on a whim. It was days following her engagement to now husband Vincent Dombrowski at the Paradise City Comic Con in Miami. The South Florida resident got the call at a serendipitous time. Her initial dress ended up in pieces due to what was categorized as an “alteration nightmare.” It wasn’t long until she found herself in New York City at Kleinfeld Bridal along with her mom, best friend/maid of honor and Foley there for support.

“It was surreal because my mom and I have literally watched every season of Say Yes to the Dress,” Reicher said. “I watched it from the beginning. So walking through those doors and on the Kleinfield showroom was very surreal. It’s even more beautiful in person.

“The way they have it set up is so stunning because you are surrounded by these beautiful dresses of every shape and color It definitely was a moment. I don’t think we got any sleep the night before.” Reicher couldn’t have been happier with the experience. Cameras were also on site during her wedding in January at the Emerald Hills Golf & Country Club in Hollywood, Fla. Foley served as officiant. The bride cherishes her bond with the popular entertainer. She has hosted Q&A portions of his live shows and gotten an opportunity to spend some time on the road with him.

“Mick, I think is the most kindhearted, charitable, giving, person that I have ever met,” Reicher said. “That’s completely besides the fact he is a New York Times bestselling author, WWE Hall of Famer, Mick Foley. I’ve always been able to separate the two.

“We both love Jim Croce, who is both our favorite singer. We sang together. I just think he has the biggest heart out of everyone I have ever met. I think we get each other on that fundamental level. We both have that love for wrestling, but he also loves my husband, my parents and have been so kind to all of us. He is a one-of-a-kind human. Everyone that meets him just loves him, and not because of his name Mick Foley.”

Along with Reicher, Dancing with the Stars’ Jenna Johnson is featured in the same episode before her nuptials to fellow cast member Val Chmerkovskiy.