‘NCIS’: Gibbs’ Secret Is Out — How Did the Team React?

[Warning: The below contains MAJOR spoilers for Season 16, Episode 22 of NCIS, “… and Executioner.”]

It’s been over a decade since we learned that Gibbs (Mark Harmon) killed the man who killed his wife and daughter, but that skeleton has only occasionally peeked its head out of its closet.

It takes a giant step out in Tuesday’s episode of NCIS, in which the network of vigilante justice, led by Judge Deakin (Mike Farrell) puts Gibbs on trial for the murder and finds him guilty — and therefore sentences him to death, via a very familiar hitwoman: Mallory (Dionne Gipson). It was back in Season 3 Episode 23, “Hiatus: Part 1,” that we saw Gibbs kill Pedro Hernandez (Thomas Rosales Jr.), and over the years since, a handful of people have learned what he did. However, those currently on his team — McGee (Sean Murray), Bishop (Emily Wickersham), and Torres (Wilmer Valderrama) — have been in the dark, until now.

That changes when someone leaves a photo of Pedro on the dashboard of Gibbs’ truck and shoots at him. At first, Gibbs he tell his team about the attempt on his life. Instead, he cites “car trouble” for being MIA. But once Ducky (David McCallum) links Deakin to the vigilante network, Gibbs confronts the judge. He says Pedro killed his family, and “now, he’s dead.” If he wants him dead, Deakin should man up and do his own dirty work. “Like you did,” Deakin asks. “You put your thumb on the scale and created justice where there was none and made the world right.” It was something that needed to be done.

“Now you want me dead for it,” Gibbs says, pointing out the hypocrisy. “You condemn me for something I did years ago while you’re still doing it.”

But Deakin knows he can’t prove it, and furthermore, why he came alone. “They don’t know what you did, do they, your team?” He asks Gibbs. “And you’re too ashamed to tell them the truth.”

Torres followed Gibbs, and when the team pulls a Gibbs and stops the elevator with him inside, seek the truth. “Whatever’s going on, we need to know, no matter what it is,” McGee says. “After all we’ve been through with you, you think there’s anything you could say that would surprise us?” 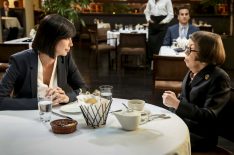 But later, after Deakin has been arrested, thanks to Mallory recording their conversation, the team discusses it among themselves on the courthouse steps.

“If Deakin had anything concrete against Gibbs, he would’ve used the actual justice system, not his own,” McGee says. When Torres asks if Gibbs wants them to bring up Pedro Hernandez, McGee asks, “who’s that?” The team is ready to move on, but is Gibbs, now that his secret is out? For the most part, he doesn’t have to see the others who know every day. The others may cope with the truth better than he handles them knowing it.

The logline for Episode 23, “Lost Time,” teases “Gibbs turns to Doctor Grace Confalone (Laura San Giacomo) for advice after he uncharacteristically unravels and abandons his team at a crime scene investigation.”

In the preview, Grace tells him he’s “barely hanging on” and we see him slam a guy’s head into a table. Is this at all case-related, or is this about his way of dealing after the Pedro secret was revealed?

After “… and Executioner,” fans’ reactions included a moment they wish had happened in the episode.

Objectively, Gibbs did act as judge, jury and executioner when he shot Hernandez. #ncis

Bishop, like me, really wants to go use that amazing bowling alley. They decide never to mention Pedro Hernandez again, which I fully endorse (but if I were McGee, I would totally call Abby. Just saying). #NCIS

The Hernandez thing is the ultimate rubber/glue scenario in #ncis. Anyone who tries to use it to take down Gibbs always finds in blowing up in his/her face.

That was a PHENOMENALLY GREAT episode #ncis
Bravo!! Poor Leon 💔❤️ Wish #Gibbs team would have said “We’re with you boss” after he confessed to them.

Sound off in the comments below with your thoughts on the team’s reaction to Gibbs’ confession.