Worth Watching: A Diva Fest at Billboard Music Awards, the Final ‘Act,’ ‘Knock Down the House’ on Netflix

2019 Billboard Music Awards (8/7c, NBC): Another week, another music awards show — although few air on Wednesdays, and even fewer are as big as the annual Billboard extravaganza, which promises to be more diva-licious than usual. Taylor Swift kicks off the festivities from Las Vegas’ MGM Grand Garden Arena with a performance of her hot new single “Me!” featuring Brandon Urie of Panic! At the Disco, and The Voice‘s Kelly Clarkson returns to host the event. Highlights include Mariah Carey receiving the coveted Icon award and delivering a medley of her hits, and Paula Abdul doing likewise in the “Throwback” moment as she revisits some of her #1 hits from 30 years ago. Also on the diva roster: Ariana Grande performing “7 Rings,” and Madonna returning to an awards stage with new music for the first time in four years, singing “Medellin,” teaming with Latin superstar Maluma. Other headliners include Halsey, Ciara, Dan + Shay, Tori Kelly and the Jonas Brothers, reuniting for their first televised awards-show performance in a decade. And along the way, some talented people will pick up awards. From musical medleys to seat-filler jokes.

The Act (streaming on Hulu): The fascinating and bizarre true-crime docudrama anthology wraps its first season with Gypsy Blanchard (a remarkable Joey King) desperately trying to defend her murderous actions in a fight for freedom. Back on the home front, neighbors Lacey (AnnaSophia Robb) and Mel (Chloë Sevigny) wonder how they could have been so duped by what was going on with Gypsy and her ill-fated mama Dee Dee (Patricia Arquette). 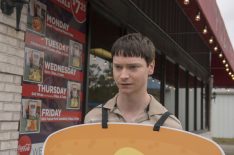 The actor talks moving on from the Disney Channel and doing justice to the autistic community ahead of the series finale.

Knock Down the House (streaming on Netflix): A film-festival favorite documentary charts a revolutionary political movement during last year’s midterm elections, following four women — including media magnet Alexandria Ocasio-Cortez — in their grass-roots campaigns to mobilize a progressive base, taking on powerful incumbents and the system at large. Ocasio-Cortez famously won her race and continues to make headlines. Plus, see who else is returning for the new episodes in the third season.

Brockmire (10/9c, IFC): The great J.K. Simmons (Whiplash, Counterpart) returns as dying sports legend/broadcaster Matt “the Bat” —don’t ask — Hardesty, long a thorn to Jim Brockmire’s (Hank Azaria) ego, but with Matt facing mortality, could it be time to make amends? Brockmire’s sobriety is shaky enough without being tested by this glimpse into the abyss, but when he takes a turn for Matt’s nurse (the terrific Christine Woods), he just might extend those visiting hours. In a very funny subplot, Brockmire’s former partner-turned-millionaire Charles (Tyrel Jackson Williams) is back, and Brockmire’s attempts to extricate the young mogul from a toxic relationship goes about as well as you’d expect.

Inside Wednesday TV: Commemorating Holocaust Remembrance Day and the 25th anniversary of the USC Shoah Foundation, Discovery airs the documentary Liberation Heroes: The Last Eyewitnesses (7/6c), featuring interviews (many from the Shoah Foundation’s Visual History Archive) with WWII veterans who share their stories of liberation… Always an emotional high point for any season, CBS’s Survivor (8/7c) welcomes contestants’ family members to the island… Boy band veteran and space enthusiast Lance Bass guests on ABC’s Single Parents (9:30/8:30c) as himself, the owner of a space camp that Sophie (Marlow Barkley) had planned to attend — until Will (Taran Killam) forgot to send in a deposit… Genevieve Gorder is host, mentor and judge on Bravo’s new design competition Best Room Wins (10/9c), in which two pros get $25,000 and four days to create a luxury-for-less space in a client’s home… Guess who’s coming out of hibernation on FX’s cult comedy What We Do in the Shadows (10/9c)? That would be The Baron, who wakes from his slumber and demands his minions introduce him to the New World during a night on the town. Is Staten Island really the best place to start?

Knock Down the House