The end is nigh, and Amazon Prime Video is prepping eager fans of Good Omens for the series premiere with a special music video.

Introducing The Chattering Order of St. Beryl, the special video features the song, “That Brand New Baby Smell,” sung to the tune of Lee Greenwood’s “The Battle Hymn of the Republic.” The song celebrates the coming of the Antichrist, who is delivered to the group of Satanic nuns by David Tennant‘s character Crowley. The a capella rendition is filled with pop-culture references, including a nod to Queen’s “Bohemian Rhapsody” music video. Included is a special guest — showrunner and Good Omens book author Neil Gaiman joins the troop of nuns for the tune, which features an array of comedic lyrics.

Good Omens arrives on Amazon Prime Video beginning Friday, May 31, and stars Tennant alongside Michael Sheen, Jon Hamm, Nick Offerman and more. The Chattering Order has been used as a marketing campaign tool for the streamer as it gears up for the end times comedy. Michael Sheen, Neil Gaiman, David Tennant, Jon Hamm, and more give us the scoop on the Prime Video adaptation.

From the group’s sing-song voices to the imagery being shown, the video for “The Brand New Baby Smell” is sure to have you in tears of laughter. Don’t miss it below, and make sure to catch Good Omens when it premieres May 31 on Amazon Prime Video. 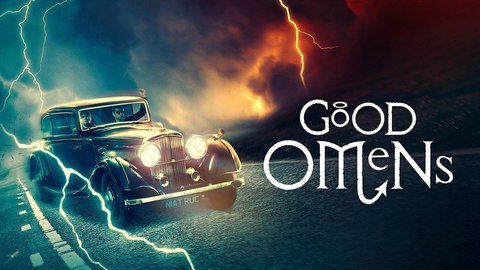