Shameless may have just wrapped its ninth season on Showtime, but the cast is looking forward to the future after Emmy Rossum‘s Fiona exit by featuring returning stars.

Noel Fisher who has played Mickey Milkovich since the show’s first season in 2011 will return to Shameless in its upcoming tenth season. The actor appeared throughout every season of the series except for Season 8, in which he was completely absent. 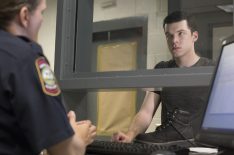 As fans know, Mickey played a larger role in the earlier seasons before making small appearances in Seasons 6, 7 and 9. In Season 7 he crossed the border into Mexico to escape possible imprisonment after he broke out of jail.

Fisher’s character reemerged in the sixth episode of Season 9, though, as it initially served as Cameron Monaghan‘s “last episode.” The on-again-off-again boyfriends were reunited when Monghan’s Ian turns himself in to prison. The big reveal at the end of that Season 9 episode was that Mickey is his cellmate. Now the show’s social media platforms have shared the news that Fisher is in fact returning with a hilarious video of the star in character making the announcement.

“Okay, okay, look, you all need to chill out. Okay? I am trying to dig my way outta here. I’m halfway to the goddamn wall. I’m sorry it’s taking longer than you’d like, but I am digging an escape tunnel with a f***in’ spoon. S**ts hard,” Fisher says from a darkened space with dirt smudged on his face.

“Any of you feel like you can bake a shovel into a cake and get it in here, bring it the f**k on. Otherwise, take a breath,” he continues. “Chill the f**k out. I’m comin’.”

This just in: @noelfisher is BACK on #Shameless season 10!!!

The news comes shortly after the show’s 10th Season renewal, along with the reveal that Cameron Monaghan is returning despite previously exiting midway through Season 9. Based on the video, could we be seeing a Ian-Mickey prison break in the future? Anything is possible.

Considering the pair are currently in prison together, it would make sense for their return to be tied, as well. Either way, we’re glad to see this familiar face returning to this fan-favorite Showtime series. Let us know what you think about Fisher’s return to the show in the comments below.