Tamar Braxton brought the drama on Celebrity Big Brother (and won!) and now she’s heading to another series known for its high emotional stakes and stunning plot twists — The Bold and the Beautiful.

Braxton is set to guest star on the daytime drama as Chef Chambre, Entertainment Weekly reveals. The character is hired to cater a special private dinner date between Don Diamont (Bill Spencer) and Heather Tom (Katie Logan), after they’re set up by someone anonymously. 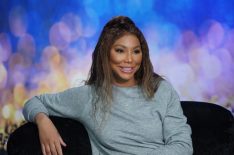 Braxton is currently taping the episode and it will air on March 28 on CBS.

The singer was unanimously voted the winner of CBB and beat out former pro football player Ricky Williams. She previously told TV Insider of her win: “It was like the best day on top of the best feeling ever. I’m such a Big Brother fan. She continued, “So, to win is astonishing to me. It’s crazy. On top winning, breaking records. Not just being the first African-American or African-American female, but winning unanimously? Those are the things that matter to me because I’m a fan of the show.” Braxton will also continue taping her family’s reality TV series, Braxton Family Values, and work on her spinoff about being a single mother. Plus, she teased there will be music coming sooner rather than later.