It’s the holiday season! Are you ready? Erin and Ben Napier of Home Town — the HGTV series in which the married couple restores houses in Erin’s hometown — are here to help.

The duo stopped by the TV Insider offices earlier this month to chat about their series as they prep for Season 3 (premiering January 14) and to give us some decorating tips — primarily the multitude of uses and styles of garland. With them, they brought two pine cone garlands (one spray-painted gold!) and a burlap number that would inspire envy around any tree. Bonus: they’re super easy to make. The 'Fixer Upper' faves are back and ready to remodel your life.

The only conflict between these two was which pine cone garland reigned supreme. While Erin preferred the gold, Ben was in favor of the traditional and natural pine cones. “I get it,” Erin says. “You’re not so polished.” Ben agrees: “Yeah, I’m a little rough around the edges.”

The proud Mississippians have really expanded their horizons since the first season of the restoration series premiered in 2017. And so has the town of Laurel, Mississippi, the real star of Home Town, and now a tourist destination! “We’ve had visitors from like New Zealand and Australia, really far away, just to visit little Laurel,” Erin admits.

Check out the full video below for more from the HGTV power couple: 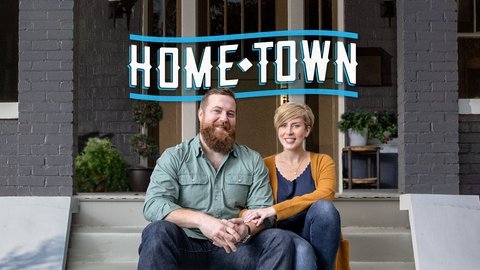