Spoiler alert! If you haven’t watched the series finale of Gravity Falls, run away as fast as you can, before Bill Cipher or one of his minions get you.

Summer has finally come to an end on Gravity Falls–the series concluded Monday night in an hour-long finale.

Fresh off the events of Weirdmageddon 2, the final episode saw Dipper, Mabel, Soos and Wendy reunite with Grunkle Stan and transform the Mystery Shack—and its weirdness-immune unicorn magic—into a giant robot/jaeger to distract Bill and rescue Stan’s twin, Grunkle Ford. Their plan prompted Ford to reveal a prophecy and a solution to beat Bill: to use the symbol-filled wheel (hinted throughout the entire series) to trap him. But then everyone hit an obstacle: Stan revealed he was annoyed at Ford, which inadvertently brought up many years of unresolved issues…and caused Bill to destroy the wheel, which trapped both Stan and Ford instead.

Although the twins were forced to make amends, Bill then threatened the other twins, Dipper and Mabel. So to save them, Ford allowed Bill to read his mind for the formula that would allow him to escape the town’s barrier, but when Bill entered Ford’s mind, it turned out to be Stan’s instead. This allowed Ford to use the memory gun and erase Stan’s memories, kill Bill and undo all the havoc he caused. Luckily, Stan’s wasn’t able to forget his annoyance at Waddles, which triggered his memory to come back. To celebrate better days ahead, the town threw Dipper and Mabel a birthday-slash-going away party, Stan announced that he and Ford were leaving and tracking down weirdness anomalies around the world and Soos got named as the new Mystery Shack manager. When Dipper and Mabel eventually left on a bus (with Waddles accompanying them), Dipper reminisced about his time in Gravity Falls and opened a note Wendy gave him which had the hopeful message, “See You Next Summer.”

RELATED: These 6 Episodes Are the Reasons We Love Gravity Falls

With so much happening in the hour-long series finale, we spoke to series creator Alex Hirsch to find out how he wanted to end the show.

How does it feel now that the series is over?
I feel very good. I am at peace. It’s nice to set out to do something, and then to do it. It’s a rare thing in television.

As dangerous as Bill was, were any of the main characters really in danger of dying?
I don’t think so. Early on in the season, just as Season 2 was premiering, out of the thousands and thousands of questions people asked me on Twitter, someone asked, “Will any characters die this season?” I said, “Yes, at least one character will die this season.” Like a tiny snowball rolling down a hill gaining size and importance, by the end of the season, I was reading people saying, “Alex Hirsch promised that Dipper or Mabel would die in the last episode. We demand death.” It was strange to watch one casual and truthful answer gain imaginary significance and turn into a full-fledged prophecy by fans.

Gravity Falls is a show about growing up, and the main arc of the series is to have our characters deal with that challenge: What does it mean to grow up? What does it mean to change? Can you grow older without losing that spark of childhood inside of you? The kids, in my heart, were never in danger of dying or anything like that. I definitely feel, whether it’s TV or movies or anything, that a punishment as grand as death deserves a crime as grand as such. In our show, for the most part, except for one or two gags, when a character like Bill is killed off, it’s only because they were threatening to kill many, many other characters. I don’t believe any of our main cast would deserve a punishment like that. I personally prefer the Pines alive. The kids who were desperately praying to see some main character die, I would say [to them], “Go outside. It’s a beautiful day.” 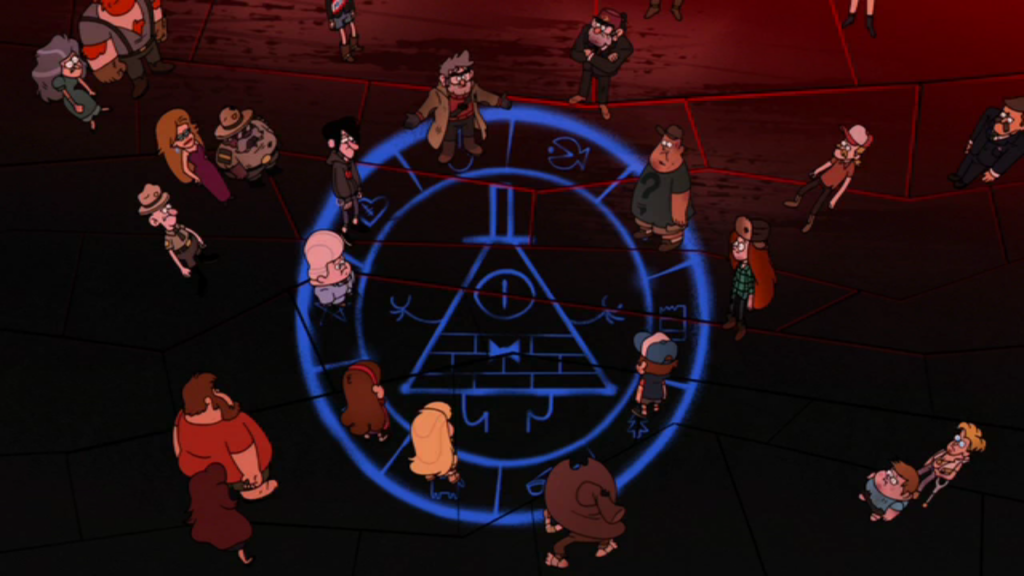 You’ve been teasing the wheel or the circle since the series began and we almost saw it in action. Was it always the plan to never show it work?
When that image was first created at the very beginning of the series, it was basically just a, “Here’s a neat symbol that connects our characters.” We knew much about the end of the show from the beginning. We knew Stan’s secret [and] who wrote the journals. We had a hunch about the situations that would play out in the grand finale, but the exact significance of that, and whether it would even appear in the show, is something that was originally not something we had invented yet. As we were getting closer to the conclusion, it seemed fitting that Bill’s mysterious Zodiac would play a part in the finale. Ultimately, the show is about characters and their choices. If our characters were to simply hold hands and Care Bear stare Bill to death, that wouldn’t mean a whole lot. It wouldn’t represent any real personal growth or conflict in our main character’s personality. We thought it would be fitting for there to be a moment related to that sense of prophecy, [but] ultimately we wanted this to come down to that decision of [Ford] potentially sacrificing everything he knows on Stan’s part and the chance for Ford to see Stan’s nobleness in action and regret thinking of his brother as selfish.

It was nice to see Stan pull one last con and save the day. How did you decide to have Stan be a hero in the end?
In terms of Stan and his brother’s conflict, we always wanted a moment where Ford saw that he was wrong. Ford’s spent an entire life imagining himself as this lone solitary hero and imagining his brother as this bumbling leech. From a narrative point of view, for Ford to see Stan be the hero finally lets Ford see the true side of his brother that he’s been too blinded by pride to see. Stan’s had many moments of heroic victory, but in the second half of Season 2, Stan has felt marginalized for the most part. He tried to run. He felt so jealous of the kids idolizing Ford that he’s even tried to run for mayor just to feel better about himself. [Stan] has been wrestling with these issues of self worth, and he was ready to risk it all to finally make good.

The whole series has been about Dipper and Mabel’s growth and relationship. What made you shift the focus of the final conflict to Ford and Stan instead?
We saw Weirdmageddon as essentially one big story, almost like a movie. We wanted to address the majority of our main characters’ innermost conflict. In Weirdmageddon part 1, we address the folly of Ford’s arrogance and Dipper really losing faith in himself and needing the realization that he can’t go it alone. In Weirdmageddon 2, we addressed Dipper and Mabel’s big fight about what growing up means, should Dipper stay or go, and did Mabel even want to grow up? After Weirdmageddon 2, Dipper and Mabel have, for the most part, completed their character arcs. Dipper, as a character who wants to grow up too fast, agreeing to slow down. Mabel, as a character who’s scared of growing up, agreeing to enter reality. Once those conflicts were resolved, Dipper and Mabel are now united. Their only conflict is physical. They have to save the town, but emotionally, they have grown. The only remaining emotional wound is the rift between Stan and his brother by Weirdmageddon 3. And so, now was the time to address it. Mabel and Dipper have an emotional moment with Stan.

Stan’s amnesia was definitely one of the most emotional moments of the hour. Why did he eventually get his memory back?
It was never the plan for Stan to lose his memory fully. I love these characters. I loved to see that they are willing to risk it all, but I love them too much to have them lose it all or actually die. The idea that the memory gun would be a way to defeat Bill seemed like a good way, within our internal rules, to take down a character who seemed undefeatable, but at the end of the day, it was very important that Dipper and Mabel would have a final goodbye with their Uncle Stan that was a real goodbye—[that] the Stan we know, and the Dipper and Mabel that we know, got to look each other in the eye, see how much they meant to each other and hug before [the twins] got on that bus to leave town. If Stan had lost his memory for good, that would [have] provided some interesting narrative places for him and his brother to go, but ultimately the show is about the kids. Stan and his brother are meant to be a parable [that show] what can go wrong in a family relationship, [but also] show that, with hard work and sacrifice, the riff can be repaired. If Stan’s memory had been fully erased, it wouldn’t punish him so much because he’d be gone, but it would punish Ford, Dipper and Mabel most. Even though Ford might deserve that punishment, Dipper and Mabel do not. Ultimately, I felt it would be unfair for them to go through that. As an audience member, I wanted to see that final goodbye.

You showed us what happens to almost everyone. Was there anyone who didn’t get a proper goodbye?
I wanted to say goodbye to all the main characters, and essentially, for the most part, we did that. Unfortunately, the reality of it is, in television your episodes have length limitations. If I could have added an extra 20 minutes to this episode, I would have said goodbye to a number of other characters and had more important roles for some of them. I will say, we are making Dipper’s actual canon Journal No. 3 from the series. Some of the lingering mysteries and threads are things that I’m very excited to explore in journal number three; all those things we couldn’t fit into this finale, into the run of the series, there will be nods and explanations and stories about many of those. They’re going to be selling the journal in bookstores later this year.

Gravity Falls Journal No. 3 will be released in summer 2016.

Gravity Falls where to stream