Hopeless romantics can’t help but enjoy a good Hallmark flick. But when the romantic leads are married in real-life, viewers are treated to something truly special.

Former Dancing with the Stars competitors and real-life spouses Alexa (Spy Kids) and Carlos PenaVega (Big Time Rush) are heading to the Hallmark Channel on August 11 for Love at Sea. This unique movie experience takes place on the Royal Caribbean cruise ship known as Harmony of the Seas, a setting the couple is quite familiar with, as the PenaVegas are avid cruisers. Lori Loughlin Shares Why She Loves Being a Hallmark Heroine

The 'Garage Sale Mysteries' star gives us the scoop.

Alexa stars as Olivia, who was raised in the hotel business and is trying to make it on her own as an event planner. She boards Harmony of the Seas to organize a friend’s event, and she meets Tony (Carlos) who has more to him than meets the eye. TV Insider spoke with the pair ahead of the film’s release to talk about what it’s like working together, why this experience was so special, chances of a Dancing with the Stars return, and much more.

You have a special connection to Royal Caribbean cruises. Did it make working on this film a little more special?

Alexa PenaVega: Oh absolutely! For us, I think this was a total ‘workcation.’ We’ve been cruising for a long time and we really love Royal Caribbean. And these ships have just been the most incredible family vacation you could ever have. So when Hallmark asked us a couple years ago, ‘Is there like a dream project that you guys really want to do?’ Immediately, Carlos was like, ‘I wanna film on a ship, we’ve gotta figure it out.’

And logistically speaking, it sounds insane. I mean, how do you work around 9,000 people on a ship that doesn’t stop for anybody? So, Hallmark and Royal Caribbean got together and they made it happen. I don’t know how they did it, but they made it happen and it was such a blessing.

What was it like working on a ship that was in service?

Carlos PenaVega: What’s crazy is there’s close to like 9,000 guests and crew on board. So it was a full-working cruise ship, and out of those 9,000 people, only 100 were our crew — we were a minority on the ship. It was interesting because the passengers’ vacation came first and the movie was not a priority for [the cruise line], although they were very accommodating. If we were doing a scene in one area and Zumba started 20 feet away, it wasn’t like we could say, ‘Hey could you not do Zumba?’ So, there was this one time Lex and I were doing this [serious] scene and all of a sudden Justin Bieber starts playing in the background, and they’re like ‘Are you ready for Zumba?’ But, you know, it made it exciting and I think at the end of the two weeks, everybody was like ‘Holy wow, we did it, we literally shot an hour and a half movie in two weeks.’ I think, technically, it was 12 days, so it was definitely a feat.

As a married couple, does that make it easier or harder going into a project where you’re playing the romantic leads?

Alexa: It makes it a lot easier. We’re a young family – we have a 20-month-old little boy, so for us, we want to keep the family together as much as possible. And I love working with my husband. We really know what each other’s limits are and we can be way more playful. I think that there’s something to be said that’s really special about getting to work with your spouse. When I’m working with other male actors, I don’t know how far I can push them. So working with my husband, we really can add fun little things that make the characters special. We can play with each other and ad-lib because we know that we’ll be able to kind of banter back and forth really well.

What was it like getting to work with veteran actors like Audrey Landers (Dallas) and William R. Moses (Falcon Crest)?

Alexa: Well first, Miss Audrey is the sweetest. She’s just so classy and wonderful and has just the kindest heart. She’s so awesome, so I would love to do a whole bunch of projects with her. She was great but I didn’t know that she was on, what was it? The Love Boat?

Carlos: I think so, yeah. Alexa: I had never seen it so — I know, how did we get on a cruise ship and never actually watch The Love Boat? But I just loved who she was as a person, cause she was fantastic, and Bill [Moses] is so sweet. There were a couple scenes we filmed that are so beautifully done in the movie that were never actually written because we felt like his character, for who he was, there wasn’t enough going on. So we’re like, ‘We really have to utilize this man.’ There’s actually a whole scene that was ad-libbed and I think that it was such a special moment that was necessary for our characters and I thought it was done so well. He was such a team player.

Your son Ocean appears in the movie, as well. How did that come about?

Alexa: Hallmark is all about family. They knew that Ocean was going to be with us anyway, so they wrote a few little scenes where he would be in there. His name in the movie is actually Tyler, and one of the execs over at Hallmark said Ocean reminded her of her son, Tyler. So there are a lot of throwbacks to the Hallmark family in this movie. We were proud parents, we never thought we’d be those parents who are constantly taking pictures of their kid. But we are so obsessed with Ocean that we could not be prouder, he did such a good job.

You both are former child stars. Would you support Ocean doing more acting in the future?

Carlos: Yeah, just to clarify, I’m still a child. [Laughs] I’m a 28-year-old child. But yeah, we’re super big on just letting Ocean do whatever he wants. He’s a year and eight months now, and his main focus right now is swimming. So I think we’re gonna let him focus on swimming and…

Alexa: Carlos is trying to make a really bad joke.

Carlos: …I might have to have a conversation with him. But I’ll totally support him. 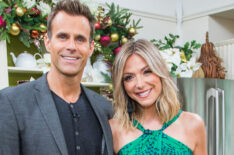 Plus, if there's a return to soaps in his future!

We’re in the midst of the reboot and revival craze. Of all of your past scripted projects, are there any you’re hoping to return to someday?

Alexa: Are you talking about our projects that we’ve done?

Carlos: Oh, about ours? Well, I wish I was in The Goonies… I think everything has a time, you know. Our band Big Time Rush, I would assume at some point we will all come back together and do some sort of reunion. I mean, that’s kind of what boy bands do. So I think that that’s gonna happen. That’s the only thing that could come back.

Alexa: Yeah, and because I guest starred in the last two episodes [of Big Time Rush], I would totally jump on board with that. So hopefully I can get in on that revival. Whatever happens. [Laughs] Shows like Dancing with the Stars like to invite former competitors back. Would you ever consider doing it again?

Alexa: You know, it’s so funny, Carlos and I talk about this every now and then. Just because it was the hardest experience we’ve ever had but also one of the most fulfilling because you are giving it your all. I’ve never felt more vulnerable, ever.I think we would for sure do it. It was unlike any experience and they become your family. Everybody there is family now, so why not? Why not?!