Iris West has always been a boss, but in The Flash‘s fourth season, Candice Patton’s fan-favorite character has been front and center for much of the action as the team’s leader.

In Tuesday’s episode, she levels up to icon status after a freak run-in with one of the show’s many metas imbues her with the speed powers of hubby Barry (Grant Gustin). Before you can say “Get that woman a costume!” our Iris is running around as Central City’s newest superhero and we’re already breathless about it.

The sarcastic Stretch Armstrong may want to call it a day—before someone else retires him.

Check out what Patton has to say about suiting up and why this stint as a Speedster will help her chase her true passion.

This is so exciting. This has been such a great season for Iris.

Yeah, it has! It’s been a lot for her to take on this season, a lot of different roles. So it’s been really good.

Especially for the fans who have been rooting for this woman to step into her own agency. And now powers? This is just next level.

[Laughs] I know. I think, over the last two years, we’ve watched her slowly become more of a leader and step into her own… and the epitome of that is her becoming a superhero herself. It’s cool for the fans who wanted to see her strap on leather for one episode. They’re finally getting it!

How does this exactly happen?

There is a meta-human that has the ability to transfer powers between people. If he touches one person with powers, those powers are then transferred to the next person. Iris ends up getting Barry’s powers that way. He is touching Barry and accidentally touches Iris at the same time, so she ends up with his powers.

Does she realize that she’s got the power all of a sudden?

Well, we see her hands start vibrating as Barry’s trying to run after this meta-human and he can’t. He’s like, ‘Wait, my speed’s gone,’ and you see Iris kind of raise her vibrating hand up into frame and she’s like, ‘I think I found it.’ 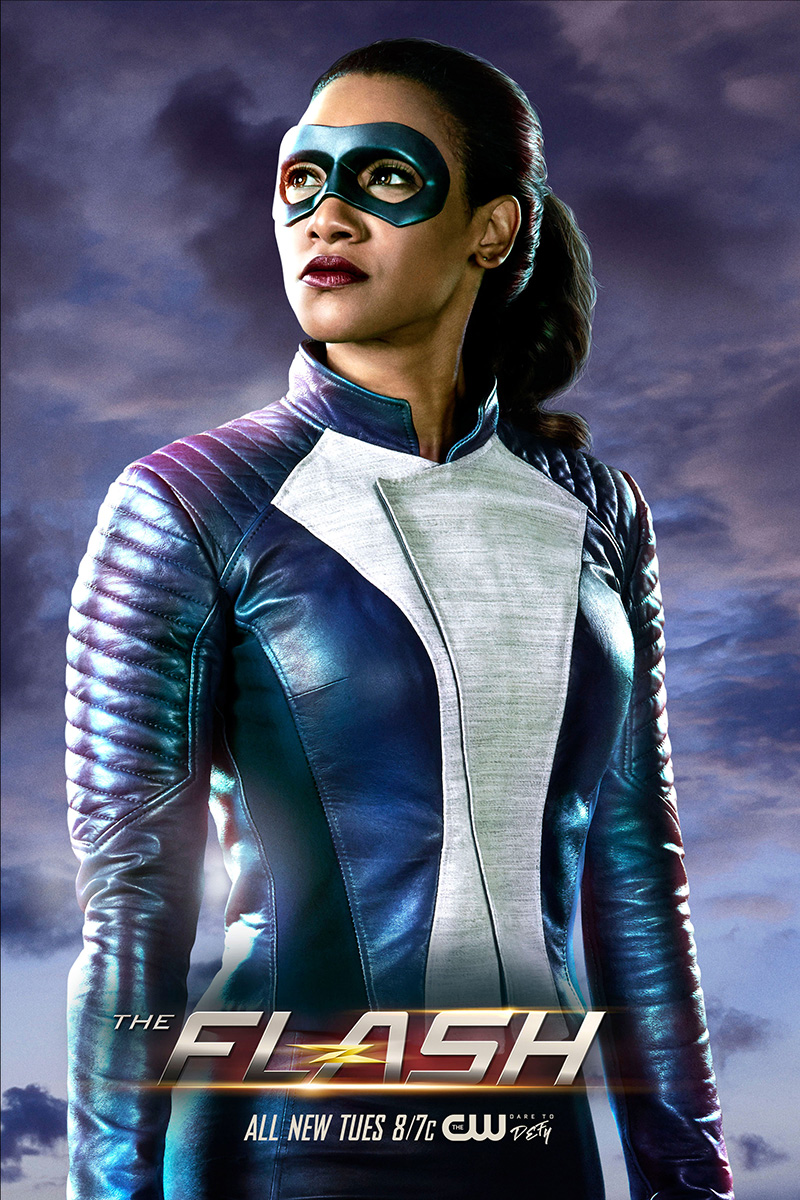 How does Barry handle being powerless?

He’s happy for Iris and wants to support her, but I think it is hard for him to not have his powers. It’s such a huge part of his identity. There is a bit of him that is kind of sad to not have it.

Is he at all worried about her? With those powers also comes that superhero life and that’s risky.

Sure. I think anyone who gets metapowers immediately thinks they’re somewhat invincible, Iris included. So I think Barry is a little worried in the same way that he was worried about Wally and all of his other friends who have gotten powers. He’s like, ‘Just to take it slow and train and be prepared.’

If this is just for one episode, I can’t imagine your training is that long.

How does she feel about having these powers?

I think she feels really good. We see kind of a conflict with her and Ralph Dibny (Hartley Sawyer) earlier in the episode, where he kind of relegates her to just a leader. He tells her, ‘You know, it must be easy. You just get to sit in S.T.A.R. Labs every day and tell people what to do. You’re not out there on the line, putting yourself in danger,’ so this is the first time that she’s actually having to do that with powers. She feels like she has something to prove.

He’s so new. The fans know she’s more than capable.

She’s pretty eager to do a really good job. Also, you’ll find out at the end of the episode that having these powers kind of reignites her real passion. She realizes that she doesn’t want to be a superhero, but it reminds her of what she really wants to do, which is to be a reporter and a journalist. Candice Patton as Iris West in ‘The Flash’

Nice! So we’re heading back into that?

I think so. We still have that newspaper to get to in 2024. This is the episode I think we see Iris remember that being a journalist is what she’s really passionate about, in the same way that Barry is passionate about being a Speedster. I’m still curious to see how that will unfold and what it will look like, but I do think it’s something that we are ready to explore again.

Does Cisco (Carlos Valdes) give you a name immediately?

No, there is no Cisco name, unfortunately! I’ve already dubbed myself the Purple Reign because she’s got a purple streak, and I think a fan had mentioned something like that on Twitter, and I was like, ‘That’s perfect, great.’

And how fast do they get you into the uniform, ’cause those things aren’t just laying around.

Well, the one smart thing we have done over the past three seasons is that Iris has pretty fantastic outfits, so it wasn’t a far stretch to have her already in this pretty dope jacket that she’s just wearing the day she gets the powers. And when you zip it up, just happens to look like a superhero jacket!

Did you have to do the whole, the full-body scanning and all that stuff for the effects?

All of it. The full-body scan, the green-screen stuff, doing the ADR, which was a bunch of random sounds of me breathing and running. It was a lot of work. I have a lot of respect for what Grant does. It was so fun! I think I liked knowing that it was one episode. I would get in and get out, and it wasn’t something that I’d have to do for the rest of the season. I really just got to have fun with it and know that it was just a fun little one-off. For me, as an actor, it was doing something different, which is always nice.

What else can you tell us about what’s coming up?

What can I say that won’t get me in trouble? [Laughs] I will say that Iris and the Mechanic (Kim Engelbrecht) have a pretty epic showdown. There is gonna be a really cool fight sequence between the two of us. I was really excited about that. I don’t think we’ve ever seen two women without superpowers fight, like hand-to-hand combat. There are a lot of good battles coming up and we’re coming to the end of trying to figure out how to take down DeVoe and using everything in our arsenal to do that.

We’re so enjoying the fact this this villain isn’t about speed or racing Barry.

Exactly. Yeah, it’s all thought. We’re pulling out all the stops. I won’t give too much, but we’re using anyone and everyone we can. That means anyone’s up for grabs, even previous villains that we’ve seen on the show. We’re using anyone we can to help us come up with an idea to defeat DeVoe. I’m actually reading Episode 21 now, and Iris is gonna be a big part of that, using her journalism to try and figure out what’s the best plan of action to take down DeVoe.

They’re really putting you to work this year!

My workload has been much heavier than previous seasons, but I’ve really enjoyed it. It’s been a long time coming and I think fans of the show and fans of Iris are really happy to see her evolve, slowly but surely. She’s coming into something really great.