Spoiler alert! Do not read read this interview if you haven’t seen Monday’s episode of Gravity Falls, lest you incur the wrath of Bill Cipher and all his dastardly minions.

Weirdmageddon is officially in full effect at the end of Monday’s Gravity Falls, which dealt audiences one big shocker after another. And according to show creator Alex Hirsch, tonight’s episode is just the beginning: “It’s only going to get bigger and stranger and weirder going forward.”

With the journals destroyed and the Pines twins still separated, TV Insider talked to Hirsch about what’s next for the Mystery Crew, that Mad Max homage and where Grunkle Stan has been. Plus, read on for a glimpse of the revised Gravity Falls opening credits—now with extra Bill Cipher.

The journals have been such an integral part of the series. What made you decide to burn them?
[Laughs] The phrasing of that question lets me go into a slightly different point before I answer the question—that Bill thought to burn them. Oftentimes after an episode I’ll have people tweeting me, “Hey Alex, why did you cause the End of the World?” And the answer is I didn’t. Bill did. We in the writers’ room create a world of characters and a world of tensions and set pieces, and we try to have them act faithfully to what their personality dictates. So in this situation, Bill is trying to lay Dipper as low as possible. He sees Dipper as a very tiny pawn on a very big chessboard. Ford is the King and he’s already captured him. So Dipper means nothing to Bill at this point and Bill wants to really, really break Dipper’s spirit. It’s more fun for Bill to toy with his victims than to outright destroy them. So for him, nothing could be crueler and more dissembling of Dipper’s sense of hope than the journals burned at Dipper’s feet. As with all things in the series, we want to show that there are high stakes, in a story where something as important as the journals can burn, who knows what else could? So it’s definitely a symbol, both to Dipper and the audience, that we are in a ramped-up situation here.

How is Dipper going to move forward without them? Because he doesn’t have Ford to turn to, either.
Dipper’s going to have to rely on himself. He came into this summer as a kind of naïve, self-serious, sort of socially awkward kid who knew little of the world beyond his interactions with his sister and his home life. And over the course of these two seasons, he has been tested again and again, learned many lessons and those experiences now have to be the journal he has inside of him. He needs to rely on himself, and only himself, in Weirdmageddon for the first time and in a way there’s a lesson for Dipper to learn there, that he can be his own leader. That he can be the author of his own story.

How will Mabel react to seeing Dipper again? They didn’t exactly leave things in a great place.
Where Dipper and Mabel left off, we saw them at odds about what their futures are going to look like. Mabel wanted nothing more than for summer to last forever and Dipper wanted nothing more than for the future to arrive. When Dipper goes to locate Mabel he will find that these perspectives are still being engaged with at the present. How they’re going to deal with that and what that’s going to look like is a big mystery. But that will be answered in an episode that’s coming up.

We saw how Soos and Wendy are coping with Weirdmageddon. But how is Uncle Stan doing and what is he up to?
[Laughs] If I told you, I’d have to kill you… As was revealed in the first episode of the season, “Scary-oke,” Grunkle Stan is aware of magic, mystery, chaos and weirdness and doesn’t exactly care for it. So when the apocalypse happens, to Grunkle Stan it’s less of a reality bending shock and more of a frustrating hassle, which comes with it, concerns about the characters he cares about. I cannot say when, where, or how we’ll see Stan again.

Now that Lil’ Gideon has decided to help Dipper with his rescue of Mabel, could this be the start of a redemption arc for Gideon?
It’s pretty clearly a redemption arc for Gideon. Gideon has been such a little jerk. I don’t think he could ever be fully redeemed for his actions. But Gideon as a character is a screaming, impulsive, spoiled, power-hungry child. He wants what he wants right now, and it’s rarely been denied to him until the Pines family arrives in Gravity Falls. Having his wants frequently denied again and again to his face has made him angrier and angrier, but finally in this episode we see that we’ve broken him down a little bit. Now that he’s on the precipice of getting everything he wants, he can see how hollow it is. And he can see that in a world where Bill is in control, he’s not really in charge. When Dipper appeals to the better side of Gideon, he’s making Gideon see that sometimes you can’t always get what you want. And sometimes being in charge is not better than the alternative. It’s clear that Gideon has turned a page but Gideon is still a nasty character. I as an audience member wouldn’t let him off the hook, but I think he finally recognizes that Bill is a greater evil than the hated Dipper Pines.

The Time Baby is dead now. Will we see the effects later on in this season?
Time Baby is a character who, in the universe of Gravity Falls, has a level of power similar to Bill. The difference being that Bill has always been trapped in a formless space where he can’t affect our reality and Time Baby can affect the reality of Time. I will say this, although we’ve seen Time Baby blasted to little time pieces, h might not be quite as destroyed as you might believe.

How did having Louis C.K. voice the “Horrifying Sweaty One-Armed Monstrosity” come about?
That was a total surprise to me, and a really fun, strange experience. We found out through the grapevine that Louis watches the show with his daughters. One of the cool things about making a kids’ show is that kids have parents and you never know who their parents might be. When I found out that Louis was watching, I thought, “What the heck? I’ll reach out and ask him if he’d like to do a totally silly cameo.” And much to my complete surprise he was willing to do it, was super funny and an absolute pleasure to work with. I’ve been such a fan of his for such a long time. It’s an honour for me to have him on the show. And hopefully he’s not too annoyed that on his iMDB [page] it now includes, “Horrifying Sweaty One-Armed Monstrosity… Louis CK.” [Laughs] Hopefully his kids enjoy it and he’s okay with how he’s portrayed.

Were the Discount Auto Warriors a reference to Mad Max?
When we were playing around with having these characters in an apocalyptic setting, it felt appropriate to us that Lil’ Gideon, whose dad runs an auto dealership, would have a store of vehicles, and when we put vehicles and convicts together it kind of occurred to us that, “Oh we can do it a little bit of a Mad Max homage.” The funny thing is, we wrote these episodes a year ago. We had no idea that a Mad Max movie, let alone one that was a big deal, would come out between us writing it and this episode airing. It’s funny for to think about 13-year-olds who will say, “This is a reference to that new movie Fury Road” and have no idea that it is a completely written irrespective of that, based on a much, much older Mad Max.

Gravity Falls airs on Mondays at 8/7c on Disney XD. 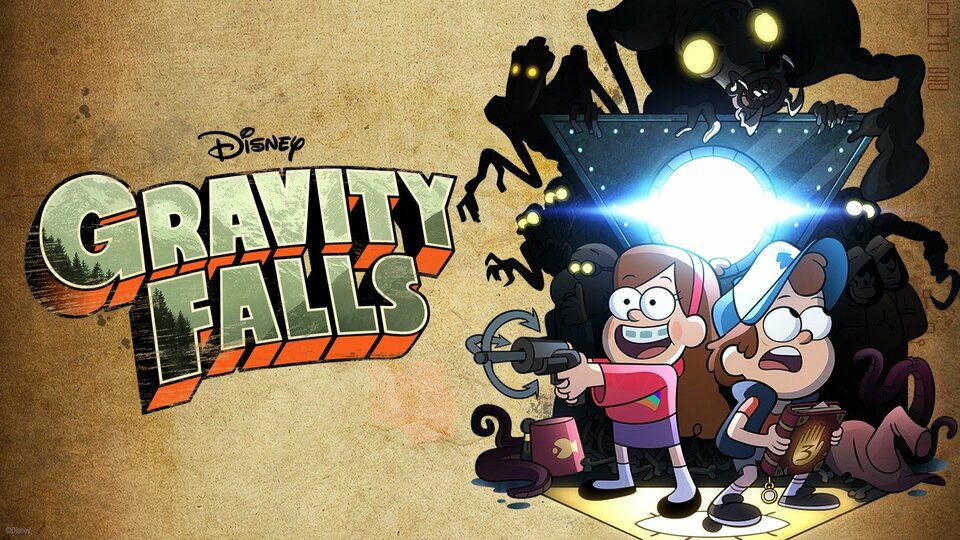 Gravity Falls where to stream