Find Out Which Series Premiere This Month On Hulu, Netflix, Amazon

Big Mouth
Series Premiere, Season 1, Available now, Netflix
Puberty is the worst when you’re the one going through it. But when it’s happening to other people? Hilarious! Comedian Nick Kroll and Family Guy writer Andrew Goldberg teamed up for this psychedelic young-adult animated comedy about the horrors of early
teenhood. Watch out for the Hormone Monster! (Seriously, that’s a character.) 'Face Off' and 'There's Johnny' will also be available through the streaming service.

Lore
Series Premiere, Season 1, Friday, Oct. 13, Amazon
This anthology series brings to life Aaron Mahnke’s Lore podcast, which uncovered the true events behind many scary legends. And by “brings to life,” we mean expect a lot of death. That’s especially true in Episode 1, about consumption in 19th-century New England.

Rillington Place
Miniseries Premiere, Thursday, Oct. 5, SundanceNow
Notting Hill isn’t all pretty homes and stuttering booksellers. OK, maybe it is now. But in the 1940s and ’50s, it was where John Christie got his murder on. Tim Roth plays him in this fact-based drama.

I Love You, America
Series Premiere, Thursday, Oct. 12, Hulu
Comedian Sarah Silverman gets to the heart of what America is all about in this hybrid talk show/political travelogue. The episodes mix in-studio interviews with vignettes from her cross-country trek, uncovering social and cultural concerns along the way. 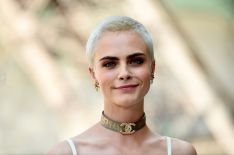 The actress will play a 'faerish refugee' who flees her homeland for a 'neo-Victorian' city.