He’s spent decades as the poster boy for goodness, decency and sunny optimism. But now Steve Guttenberg—at age 58—is reveling in the chance to be a world-class ass. The actor, best known for the hit films Three Men and a Baby, Cocoon and the Police Academy franchise, has joined HBO’s Ballers as Wayne Hastings Jr., a spectacularly rich and ruthless Las Vegas casino magnate who believes he’s God’s gift to the universe. Hastings has it all, and then some. Or so he thinks. But then he meets former NFL sensation Spencer Strasmore (Dwayne “The Rock” Johnson)—now a money manager for sports stars—who is dangling quite the tantalizing carrot: Spencer wants to join forces with Hastings to build an epic stadium in Sin City and relocate a top NFL team there. Will Hastings bite…or will he squash the gargantuan Spencer like a bug, steal the ball and score his own touchdown? Guttenberg gave us the blow-by-blow. 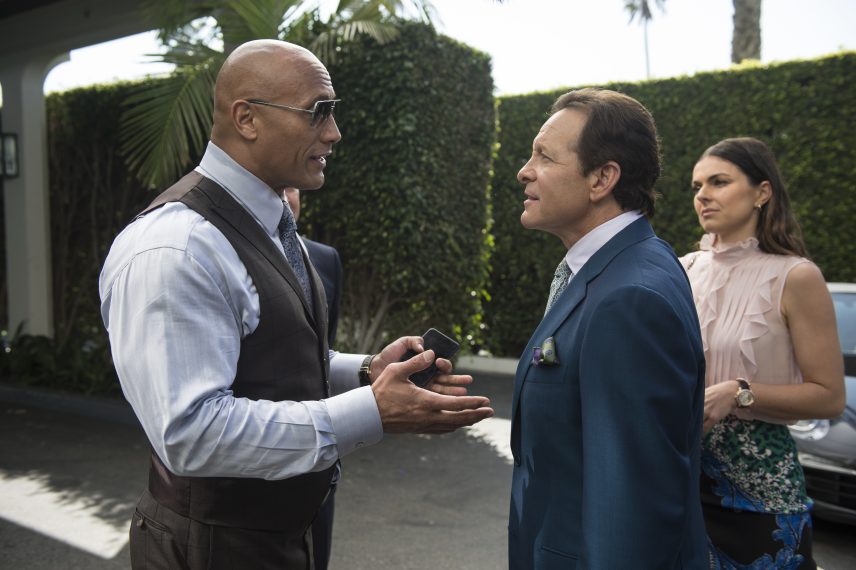 You tear into this role like a starving man invited to a banquet!
I love being detestable. Wayne is unbelievably pompous and pretentious and wealthy beyond anyone’s dreams. But you still relate to him. We’ve all had feelings of delusion and self-importance, just not on Wayne’s scale. He needs nothing. He’s like, “Show me something I haven’t seen! I’ve been there, done that and got the T-shirt.” But then Spencer comes along and says, “Naw, I don’t think you’ve got this T‑shirt.” And that gets Wayne very excited.

Not to read too deeply into Ballers, but Wayne—who openly brags about knocking up showgirls—hits the series just as Spencer is freaking out about possibly being infertile. Is that intentional?
We don’t play it up. Wayne has no clue what Spencer is dealing with in his personal life, but it’s one of those powerful, underlying things that makes Ballers a lot more sophisticated and subtextual than people think. This is classic Greek storytelling that gives its hero an Achilles’ heel. Poor Spencer is already going through a tough time. [Laughs] Now he suddenly has to deal with a testosterone-fueled a–hole!

Villains also have their weaknesses. What’s Wayne’s?
He’s a second-generation mogul, and behind all that boasting and bravado there’s a jealousy of guys like Spencer who have succeeded in life without being born to privilege. At one point, he even gives a toast to Spencer, saying, “I’m grateful for real men like you who roll up their sleeves and grind it out.” He can give the compliment, but it’s eating him up inside to do it. Does it feel surreal that you—of all people—have been hired to make The Rock grovel and squirm?
Hey, we’re actors. This is what we do. Between “­Action!” and “Cut!” I play for blood, and Dwayne gives as good as he gets. But I will tell you this: There is nothing daunting about Dwayne when the camera is off, and I’ve found that to be true of all the towering, ridiculously handsome guys I’ve acted with in my career—Tom Selleck, the late Gregory Peck, even Caitlyn Jenner back when she was Bruce. They all understood the power that comes with great physicality but they ­never took advantage of it. They understood their responsibility to be cool, decent men. And that’s Dwayne. He couldn’t be kinder or more thoughtful. [Laughs] It’s an honor to intimidate him.

Have you felt stifled by so many good-guy roles?
Look, not everybody is going to see my talent, and that’s OK. But the smart guys, like [Ballers creator] Stephen Levinson, always sense what I’m capable of. Ninety-five percent of the people in this business are mediocre. The other 5 percent are masters and they can look beyond the parts an actor is known for and see that he can grow. They go, “Hey, this guy knows how to build apartments. I bet he can build a really great house!” That’s what an actor like me lives for.

Ballers is all about staying in the game, no matter what. Is that your career philosophy too?
I could never bail. I’m crazy about this business, man! Whether I’m doing some innocuous small part or a role that’s meaty and complicated, I give it everything I’ve got. There are many guys out there way more talented than me, but nobody works harder. I’ve got grit. You cannot wear me out. It’s been a long time—probably 15 years—since I’ve been in the A game, and I really wanted back in. Ballers made it happen.