It seems that just about every week Marvel is announcing another new series on another network.

Though some may cry, “Enough already!” we’d be lying if we weren’t a little excited to see how some of these turn out. From Marvel’s The Defenders to the untitled animated Deadpool series, here’s what we know about these upcoming shows…so far.

Marvel’s The Defenders
Network: Netflix
Premiere: August 18, 2017
Episode Count: 8
The highly anticipated miniseries stars Charlie Cox as Daredevil, Krysten Ritter as Jessica Jones, Mike Colter as Luke Cage and Finn Jones as Iron Fist, all reprising their roles from their individual Netflix series. Elodie Yung will also reprise her Daredevil role as Elektra Natchios. The four heroes will band together a few months after the events of Daredevil‘s second season to fight The Hand. You can even see them visiting each other’s hangouts in those neat Twitter posts Netflix put out a few days ago. First Look at The Defenders (PHOTOS)

Marvel’s The Punisher
Network: Netflix
Premiere: 2017
Episode Count: 13
Filming on the Daredevil spinoff starring The Walking Dead alum Jon Bernthal just wrapped last month. Steve Lightfoot (Hannibal) is serving as showrunner with Jeph Loeb and Jim Chory as EPs. Based off of the comic series, the storyline will follow Frank Castle (Bernthal) as he becomes a vigilante called “The Punisher” after the death of his family.

Before its ABC premiere, the series will release two episodes on the big screen September 1. There are currently no plans for a crossover with Marvel’s Agents of S.H.I.E.L.D, though, of course, both series take place in the same universe and could affect each other.

Marvel’s Runaways
Network: Hulu
Premiere: Winter 2017
Episode Count: 10
From showrunners Josh Schwartz and Stephanie Savage, the series will be based on Marvel’s superhero team of the same name. The series has an enormous cast and follows six teens who team up to unite against their criminally-aligned parents, known as the Pride.

Marvel’s The Gifted
Network: Fox
Premiere: 2017-2018 season
The long-awaited X-Men pilot follows an average suburban family who discovers their children have mutant powers and go underground to protect themselves. Check out the teaser trailer below and keep an eye out for the full trailer coming May 15. Marvel’s Cloak & Dagger
Network: Freeform
Premiere: Early 2018
Episode Count: 10
This hourlong drama stars Olivia Holt as Tandy Bowen/Dagger and Aubrey Joseph (The Night Of) as Tyrone Johnson/Cloak, two mismatched teens in a romantic relationship, one with the power of light and one with the ability to bring on darkness. Andrea Roth, Gloria Reuben, Miles Mussenden, Carl Lundstedt, James Saito, and J.D. Evermore also star in the series. Joe Pokaski serves as showrunner. Check out the first trailer in the link below. Marvel’s New Warriors
Network: Freeform
Premiere: 2018
Episode Count: 10
This live-action comedy follows six young and powerful people who—though not quite superhero status—live together and try to better the world in small ways with the powers they have.

Though no casting news has come yet, we do know which characters you can expect to see in the project including: Doreen Green (Squirrel Girl), Craig Hollis (Mister Immortal), Dwayne Taylor (Night Thrasher), Robbie Baldwin (Speedball), Zack Smith (Microbe) and Deborah Fields (Debrii).

Untitled Deadpool Project
Network: FXX
Premiere: 2018
Episode count: 10
This animated adult series on the network Archer calls home (and on the sister net of Legion‘s home) is being helmed by the creator/star of Atlanta, Donald Glover, along with his brother Stephen Glover, a story editor on the aforementioned breakout dramedy. Jeph Loeb and Jim Chory will also serve as executive producers.

Obviously, this is riding off the success of 2016’s blockbuster film starring Ryan Reynolds (is it too much to hope that he’ll join this project to voice the Merc with the Mouth?), but other than the facts above, there isn’t much known about this series yet. We’re sure it’ll be just as R-rated as its film counterpart, whose sequel is set for June 2018. 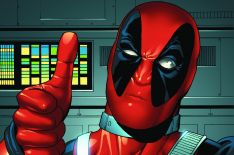 Marvel’s Damage Control
Network: ABC
Premiere: TBD
Don’t hold your breath for this one. It’s looking unlikely that ABC will be moving forward with this Marvel comedy series, especially after Powerless‘ short-lived time on NBC.

Damage Control follows the clean up crew of the Marvel Cinematic Universe with the same name, who specialize in dealing with the aftermath of superhero battles. ABC ordered the half-hour pilot in October 2015, to be developed by Ben Karlin. Last January, it was announced that the series had been planned for the 2016-2017 season, but there’s been no word on the project since.