“This is my new way of coercing my showrunners to write things,” Camryn Manheim tells TV Insider while discussing the double dose of Lieutenant Kate Dixon in the Law & Order world this week. “Just say, where’s this? When’s the deaf son [coming in]? And when is Dylan [McDermott, her costar on The Practice and currently in the Dick Wolf Universe on FBI: Most Wanted, guest starring]?”

First, on the OG drama on January 5, in “Land of Opportunity,” a homeless migrant is murdered, leading Cosgrove (Jeffrey Donovan) and Shaw (Mehcad Brooks) to a mysterious cover-up at a construction site. Price (Hugh Dancy) and Maroun (Odelya Halevi) push a key witness to testify knowing that speaking out could lead to legal consequences. Then on SVU, in “Jumped In,” Dixon comes in to help when a deaf student is raped; an earlier Law & Order episode showed her signing and she shared she has a deaf son.

Manheim previews both cases and more.

We get double the Dixon this week.

Camryn Manheim: [Laughs] Yeah, we do. Oh my gosh, I better tell my mother to watch both episodes. And it starts with Law & Order, so preview that case.

This is a really important episode. I’m always so proud when our show highlights the underdog, for example. As you know, we usually rip stories out of the headline. But this story is kind of an amalgamation of a gazillion stories. It spotlights the experience of migrants and immigrants coming to America and their struggle with our criminal justice system, their apprehension of speaking up when they see something or doing the right thing if they’ve witnessed a crime because they fear that they’ll be deported. This case is about an immigrant who witnesses a crime and we obviously want to seek justice. And I think Dixon knows — not just Dixon, but even the DA’s office, who wants to promise “nothing will happen to you if you give us information,” we can’t really promise that because it’s the system is broken that way. We can’t give immunity to people. It’s about a murder and how we get to the truth of it and who are the casualties along the way.

And then you head over to SVU to help out with their case.

It’s bringing back a case that was never settled about many rape victims who all happen to be deaf. Benson [Mariska Hargitay] knows that her colleague, Dixon, has a deaf son, knows sign language, and asks me if I could come over and help. The episode itself is very fascinating and made even more fascinating by having four deaf actors on the show who are fantastic.

What was important to me was that we get the procedure right about how we use interpreters or if it’s OK to have a lieutenant come over from another precinct and interpret for deaf people. It’s very tricky and you want to get it right. And so I was able to have really meaningful conversations with the writers and talk to them about the best way to teach the audience how this should be handled inside a precinct and how it should be handled properly. That was really exciting for me, to be a part of that discussion.

You get that right off the bat, and I just love the Dixon-Benson scenes. I want more of them.

I love Mariska as a friend and I honor and respect her as Benson and what she has done for everyone’s perspective on women and what they go through and the special victims unit. She kept saying to me, “I need you to come over there because no one’s even asking me how —” She gets a little roughed up in the show. She goes, “None of the guys say, ‘how you doing? You doing OK?’ And I go, ‘I just need a woman to come over and have that moment with me, how do you feel?'” And so it was really important to her to incorporate a female perspective on the circumstance she puts herself into and how she takes so many blows and it’s not just part of the job. It’s not just business as usual when you get attacked, and she just needed to have some friend acknowledge and say something about it. So even though it’s brief, it’s there and it’s meaningful. Women support each other and women take notice of things. It’s important. What else is coming up for Dixon?

I really want you to put inside your article, “I know Dixon said she had a deaf son. When are we gonna meet him?”

That was my next question!

One of the things that I think is really interesting about Law & Order is that we have a tall order, right? We have 44 minutes to bring you a show, 22 of those minutes we’re searching out the criminal, the perpetrator. We’re also trying to give you a million red herrings for the audience to get involved and figure out who it is. And then we have to hand it off to the district attorney’s office and they get 22 minutes to bring that criminal to justice. So inside that formula, it’s kind of hard to go deep into our characters.

But that is one thing that I miss as an actor is that we don’t know as much about Dixon as I would like to know — I can’t speak for the audience — so I make stuff up all the time. I’ve made up that Dixon comes from a family of blue bloods, that her grandfather, her father, her brother, everybody was in the police department. I don’t know if that’s true, but that’s what I’ve created for myself because I always have to ask myself, why is Dixon so smooth? Why doesn’t she get riled? Why is she just always thinking a step ahead? I don’t know why, but I create a back world for her and then a next episode will tell me a little bit of information that I can incorporate and then someday they’ll tell me that my whole idea of her being a blue blood isn’t true. [Laughs] But for now, that’s how I operate.

I would love to see a little bit more of their personal lives, but it’s hard because we have a lot of restrictions in terms of time. But as far as the show, I’m very, very proud of the of the storylines that they’re telling about police, corruption, abuse of power, abortion, rape, and immigration. All of these things are so important right now. I’m very proud of the stories we’re telling and how they’re trying to do justice to those truths. Do we get it right all the time? We don’t have time to dive deep into every one of those subject matters. But I think just bringing it to the viewers’ attention and doing the best we can is great. 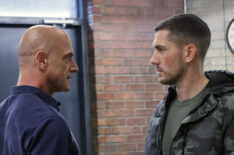 And the show is good about dropping things here and there, like we heard that Dixon has two ex-husbands and how she met them and then she’s like, I’m single.

That’s right. “I met him at a biker bar and we were drunk out of our brains.” That comes from a conversation I had with the showrunner before I took the job when I said, “Well, here’s some things you should know about me that are unique: I know sign language. I rode a motorcycle for 40 years, I got 12 holes in one of my ears,” and he was like, “Oh my God, this is great.” And it sticks in his mind and then he just plugs those things in when he has a second to do it.

I cannot wait to learn more about Dixon.

Me too. We’re gonna learn more and more about her because she’s gonna be around for a while. I’m really grateful that you guys are so interested in the show and you keep writing about it because it’s just great to keep us in your heart because it’s such an important part of our television history. So I’m proud to be a part of it.

It’s so good to have it back.

I’m having the best time. I don’t know if you get a chance to speak to Jeffrey Donovan and Mehcad, but we really have the best [time]. You can’t just talk about murders all day long and just get into that morose dark world. They’re pranksters and it’s so fun. And then we try to spotlight real stories that affect real people, but in the meantime, we’re having a great time and we’re just grateful to you and the viewers, that’s for sure.