[Warning: The below contains MAJOR spoilers for Ghosts Season 2, Episodes 9 & 10, “The Christmas Spirit” Part One & Two.]

Ghosts served up its first holiday episode, and as promised, it was a spirited affair for the livings and ghosts at Woodstone.

While several romantic storylines unfolded, one had the sweetest ending of all as Brandon Scott Jones‘ Isaac finally shared a kiss with red coat boyfriend Nigel (John Hartman). Reluctant for reasons revealed in the episode, Isaac carried guilt for hundreds of years regarding his wife. He believed she resented him for ruining her life, considering his sexuality, and so he had reservations about deepening his relationship with Nigel.

Ultimately, Sasappis (Román Zaragoza) dispels this theory Isaac had about his wife, recalling that when he was on his deathbed, she came to visit and make sure he was changed into his uniform before dying. The relief and understanding that Isaac’s wife cared for him despite their imperfect marriage, reassures him that it’s okay to find happiness with Nigel now. Before the episode concludes, the pair get to share a festive kiss, which Jones says “is nice to have a queer story at the center of a Christmas special.” When it comes to Isaac and Nigel, the actor says, “it feels right that a moment like Christmas or underneath the mistletoe is the thing that would give Isaac his chance for a next step. He’s been holding his relationship back so much that he needs this to happen, so it feels like a Christmas miracle.”

As for what awaits the happy couple when the show returns in the new year, Jones teases, “they’ve settled into something a little bit more routine and a little bit more recognizable to a television audience, like a traditional TV romance. But I think that still comes with its challenges. It still feels very much like first love and all the little nooks and crannies.” Even with the exploration of challenges, the actor says things will “perk up a little bit.” He even reveals that “Nigel at some point in the season will discover a secret that’s going to really give him a little bit of power as well.” Could that secret have something to do with Trevor (Asher Grodman) and Hetty (Rebecca Wisocky)?

Following a disappointing outcome with Jay’s (Utkarsh Ambudkar) sister Bela (Punam Patel), Trevor’s frustrated romantically and one thing leads to another, he and Hetty end the episode kissing passionately. Could the prideful ghosts work out some kind of secret arrangement? Only time will tell. 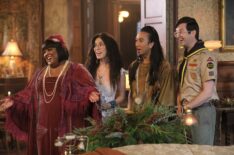 And if you were shocked by the surprising hookup, you aren’t alone. “We were all shocked by [it when we read] the page, which was really fun,” Jones says of the cast’s reaction to Trevor and Hetty. “None of us saw that coming, but when you look back at the season, you can kind of see all the little ways they hinted toward it, which is really interesting.”

“There’s definitely a lot of romance in the air in general on the show,” Jones previews. “Sasappis is gonna have a partner at one point. And I also know that Thor (Devan Chandler Long) and Flower (Sheila Carrasco) are gonna take another step in their relationship as well. You’re gonna definitely see right as Valentine’s Day is coming up, a lot of us ghosts are in relationships.”

We’ll be on the lookout as these ghosts ring in the new year, until then, let us know what you thought of the surprising holiday special in the comments section, below.