Warning: The below contains MAJOR spoilers for the season 3 finale of LEGO Masters]

The red carpet was rolled out for the season 3 finale of LEGO Masters as the winners were crowned. It was down to firefighters Stephen Cassley and Stephen Joo, influencers Stacey Roy and Nick Della Mora, and siblings David and Emily Guedes. The semi-final round saw the brother duo of Brendan and Greg Tull hit the bricks during the water-infused build challenge.

The three remaining teams were given 24 hours and a clean slate for their final build to showcase their creativity, storytelling, and technical ability. Judges Amy Corbett and Jamie Berard wanted to be wowed. Host and executive producer Will Arnett threw out one last curveball. Teams were presented with swag bags containing the first sets they built as a child in celebration of 90 years of LEGO. They had to incorporate pieces from the sets into their master build.

This twist fell perfectly into Stacey and Nick’s imaginative bookshelf concept featuring nostalgic elements growing up. In the end, the colorful bow-loving underdogs were named LEGO Masters, earning them $100,000, a trophy, and the opportunity to display their work in LEGOLAND New York. Here the champs chatted exclusively with TV Insider about a season that included a wrecking ball, dinosaurs and Hollywood star Chris Pratt, NASA astronauts, dogs, NASCAR and Jeff Gordon, and everything in between.

Your journey on LEGO Masters was really a rollercoaster ride, but you managed to peak at the right time.

Nick Della Mora: I think it was really exciting the way Stacey and I came together with that last challenge. We were struggling to come up with an idea for a little bit. Suddenly, we built on these ideas we each had. This led us to produce a build we had a lot of fun working on, putting so much of our personality, childhood, and memories. Hopefully, it gives that same nostalgic feeling to other people.

Stacey Roy: Perseverance really is key. We leaned on each other, taking on each challenge and giving everything we got. I think that is what got us to the end. When we were in that finale, we had 24 hours to build whatever our hearts desired. I think what we created was really beautiful. You managed to come back from landing four times into the bottom two. What got you through those difficult times?

Nick: I just want to highlight Stacey’s positivity and perseverance. I can be a pretty critical builder. It has allowed me to get very good at building, but when it comes to LEGO Masters you don’t have the opportunity to go back and fix what you did wrong. I got pretty down on myself pretty quickly. Stacey came in and saved the day on so many occasions. The way we kept each other motivated really got us to climb out of that rut.

Even more impressive, you two basically had never really worked together in person before the competition.

Stacey: What is kind of crazy is a year ago LEGO Masters wasn’t even on my radar. Nick and I were just starting to talk about auditioning together and trying it out. I didn’t even know this was a possibility. Because we both live stream on Twitch and Amazon, we were able to come together and build this friendship online.

Nick: It was interesting building together in person for the first time on set. We did some little practice sessions where I coached Stacey with some more advanced building techniques she might not have been familiar with. I think because we have similar backgrounds and careers, we kind of got each other compared to two people who might not have otherwise. We know what goes into live streaming and content creation. That allowed us to come together as a team really quickly.

Stacey: We developed an amazing friendship. More than anything, I’m grateful for that. We created this wonderful friendship that I know will last forever.

Talk about the bows. Viewers love that fashion trademark.

Nick: The bow was something I had created a few years ago. I love integrating LEGO into every aspect of my life. So I came up with this design for the bowtie. It’s something I like to wear on special occasions. I thought LEGO Masters was a fitting time for me to wear it. I also whipped up a hair bow design for Stacey. They just really liked how we looked in them, so it just became a big part of us on the show. 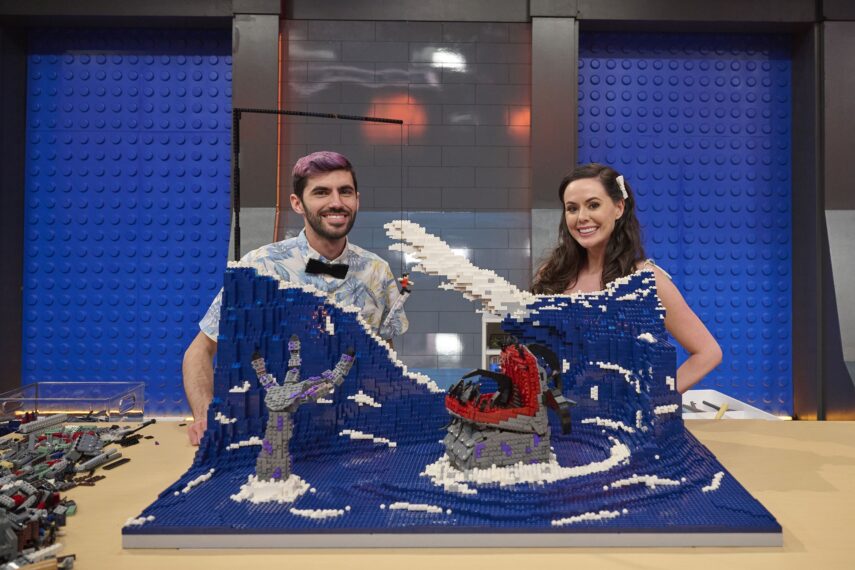 Nick: For me, I’m just getting started in some major parts of my life. I recently got engaged. You got to meet my fiancée when she was my girlfriend on the show. We are saving up for our first home together. This will be a huge help.

Stacey: I think I’m still coming to terms that we won LEGO Masters. That is still settling in for me. I do a lot of content creation. I’m looking for my next show. Probably some of that money will go to building my next set and show.

Nick: I think the water challenge was so different. You would not imagine having something like water directly interacting and influencing how your LEGO build works and functions. Coming to terms with that was really challenging but was a lot of fun as well.

Stacey: For myself, I would say the race car challenge because that was when everything turned around for us. I loved getting to work with another team. That was a lot of fun. I felt that got our groove back. Then to win the challenge. From then on we took over.

Nick: There was also the mini-golf challenge for sure. I think I said to Stacey the only way we’re staying in this is if by some miracle our builds work perfectly. Fate decided it was meant to be. It worked how we hoped. It made for a fun round for Will. The judges realized that even with all the struggles we had the technical aspect which held us together. That gave us a slight edge to survive. We always had some aspect of our build that gave us just enough to have a leg up on the competition.

Stacey: What was great about the mini-golf episode was all the other teams were cheering for us. They were as anxious as we were. It shows what amazing friends you make on LEGO Masters. They have become a huge part of our lives. I think there was a moment I thought that even if we did go home I was so proud of our build and that it worked and came together with the spirit of the room. What will you take from this experience to put the proverbial bow on everything?

Nick: Meeting all these amazing people. The family we got to build through this shared experience. That is one of the best prizes I walked away with. I’m so grateful Stacey and I were able to come together as a team to win. I’ve loved LEGO with all my heart my entire life. This is the ultimate reward. I imagine my childhood self hearing that someday I will literally be a LEGO Master. It’s really hard to put into words. It hits me emotionally. Hopefully, it will inspire kids to keep at it. That if you love something, keep at it because you never know where it will take you someday.

Stacey: If there is something you are passionate and creative about, just give it everything you got because you have no idea where it will take you. That goes for girls too. Just keep building with LEGO. I’m so grateful for the opportunity. I can’t wait to see where it takes Nick and me next. We’re so over the moon. We’re so happy to finally say it! We’re LEGO Masters!