What better way to celebrate the holidays than with your favorite animals? HouseBroken is airing two special holiday episodes on December 4, and TV Insider has your exclusive first look (and listen!) at the new holiday theme song.

The song, “Woofin’ & Meowin,'” was written specifically for the Fox animated show’s holiday episodes by the popular UK indie band Superorganism. And, as you can see and hear in the video clip above, it’s catchy!

The two holiday episodes kick off at 8:30/7:30c on Sunday, December 4. First up is “Who’s Found Themselves in One of Those Magical Christmas Life Swap Switcheroos?” In it, standard poodle Honey’s (voiced by Lisa Kudrow) holiday wish comes true when a mix-up at the vet sends her to a dream home, while her idiotic doppelganger goes to live with dopey St. Bernard Chief (voiced by Nat Faxon). Meanwhile, social-climbing Hollywood pig Max (voiced by Tony Hale) has to hide from his new owner David Spade when he discovers that Spade wants to make him the holiday ham.

Then, at 9/8c comes “Who’s Having a Merry Trashmas?” and Honey and Chief are home alone for the holidays. When a mysterious intruder tries to break in, they team up with Raccoon to protect the family home. Meanwhile, chonky, co-dependent cat Chico (voiced by Sam Richardson) experiences hunger for the first time, and power hungry, know-it-all Corgi Elsa (voiced by Clea DuVall) falls in love with a robot dog. 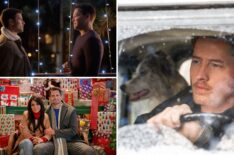 HouseBroken offers an irreverent look at human behavior through the lens of animals, whose search for meaning often takes them on wild adventures, far away from the cushy confines of domestic pet life. The series also features Will Forte as the voice of sex positive tortoise Shel, Jason Mantzoukas as the voice of street-smart cat The Gray One, and Sharon Horgan as the voice of aging Persian cat beauty queen Tabitha.