Rock and roll legend Bruce Springsteen‘s in-depth interview with Howard Stern, which aired on SiriusXM last month, will be shown in its entirety on HBO on Sunday, November 27, at 10 pm ET.

Snippets of the interview were initially only accessible to SiriusXM subscribers. However, Stern and Springsteen agreed to make it widely available after the long-serving radio personality deemed it “the greatest” interview he had ever done. In addition to its HBO airing, the interview will also be made available to stream on HBO Max. You can watch a teaser for the interview below.

The two-hour-long conversation takes a deep dive into the six-decade music career of The Boss while also touching on moments from his personal life. Springsteen also provides in-studio performances on the acoustic guitar and the piano as he details the origins of some of his biggest hits, including “Thunder Road”, “The Rising,” and “Born to Run,” and many more.

“Bruce Springsteen is a few inches away from me, and I’m starstruck,” Stern says at the start of the teaser. We also see Springsteen discussing the writing process and finding a good song title. “Years will go by with nothing,” he admits. There is also a rare moment where Stern gets teary-eyed. “Finally got me to cry on the air; it’s the first time ever,” Stern says.

The pair also talk about Springsteen’s new studio album, Only The Strong Survive, a cover album of fifteen R&B and soul songs, which was released last week. It marks the second cover album from Springsteen after 2006’s We Shall Overcome: The Seeger Sessions. 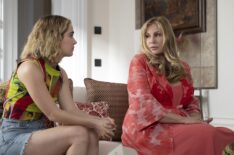 'The White Lotus' Books Another Season at HBO With New Guests

Stern talked about the decision to air the entire interview on HBO on his radio show on Monday (November 21), stating, “I just said to Bruce on the phone … ‘Man, I just think this was the greatest. I want to see more people seeing it.’ And he said, ‘Me, too,’ and that was it.”

“I think it was really a special moment. I thought Bruce Springsteen was generous, loose as a goose,” Stern continued. “The guy is singing; he’s talking. For those of you who have seen it on the SiriusXM app, you know what I’m talking about. And now, people who don’t have SiriusXM and have the HBO situation on their cable, they’ll be able to see it.”