The Waltons family grows by one in A Waltons Thanksgiving, premiering Sunday, November 20 on The CW. Ahead of the premiere, Ma Walton herself — Scandal‘s former First Lady Bellamy Young — popped by the TV Insider office to dish on her second Waltons film and play a round of Holiday Hot Takes.

We asked the season’s hardest question: Is Die Hard a Christmas movie or not?! According to Young, it absolutely is. In the video interview above, she explains why, gives her take on more “holiday” movies, and gets into what makes A Waltons Thanksgiving an ideal watch throughout the holiday season.

In A Waltons Thanksgiving, the titular family excitedly prepares for the annual Harvest Festival Fair on Walton’s Mountain in 1934. Through the hardships of the Great Depression and the stresses of holiday preparations, the Walton family will come together to make sure love prevails when a young boy’s arrival dramatically changes their lives.

This is Young’s second turn as Olivia Walton, but Teddy Sears‘ first run as John Walton Sr. (who was played by Ben Lawson in The Waltons: Homecoming 2021 Christmas movie). Young says Lawson was sadly unavailable for this new film, but Sears joining the fold is “apples and oranges of greatness.” While they are indeed one big, happy family, Young says the Waltons are “stretched as thin as they can be” in this new tale. So why take in another mouth to feed? “There’s always room for more love,” she explains. A lifelong fan of the original series, Young tells us this new story (narrated by original John-Boy actor Richard Thomas) exemplifies what makes this classic TV family so beloved. “They were the first multigenerational family on television, so I think they weren’t aspirational in any specific way that was unattainable. We really saw ourselves in them,” the Prodigal Son alum shares. “It just felt like home … I think that just endures. We’re still trying. We’re still doing our best, now more than ever, honestly. That truth still touches people.” 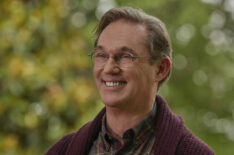 Young is no stranger to playing a protective, loving mother, but Mellie Grant definitely has more bite than Ma Walton. Still, Young sees some shared traits between her two characters. “They’re both fiercely devoted to their families, just in polar opposite ways,” she shares. “Mellie will wreck your house and burn it to the ground to save her family, and Olivia will just love you so much that you grow into the person that you knew you could always be. So two sides of the same very devoted coin.”

Does Young love the fact that she’s playing a character named Olivia as much as we do? Yes. “That was the first thing I thought of,” she admits with a smile. Truly, who wouldn’t make this Olivia Pope connection.

Learn more about A Waltons Thanksgiving in the full video interview above.