[Warning: The below contains MAJOR spoilers for The English Season 1, Episode 6, “Cherished.”]

The English may be set against a post-Civil War Western landscape, but the tale told in Hugo Blick‘s sprawling six-part series is a little different than your usual frontier fare.

A revenge story at its core, Emily Blunt‘s Lady Cornelia Locke is determined to make Rafe Spall‘s David Melmont pay for his actions. What might those actions be? If you’ve yet to tune in, now would be a good time to turn back and binge, because we’re heading into major spoiler territory.

David Melmont is a swindling businessman who in a flashback to years before her quest, tricked Cornelia into believing Thomas Trafford (Tom Hughes) — the man she entrusted with funds from her father to help build up the American West — had become imprisoned for criminal activity ranging from the killing of innocents to indulging in brothels.

Tricking Cornelia out of money to help bail Thomas out, she receives a letter that unveils the truth, that David Melmont is the real scoundrel. Angry, she confronts him, but the man ends up raping her, leaving her pregnant and infected with syphilis. The illness which is manageable by today’s standards was a death sentence for Cornelia and her son though. While her boy lived for 14 years, his face was severely deformed, and Cornelia’s own diagnosis made her a pariah among the high society she’d been born into in England. Following her boy’s death, Cornelia strikes up a bond with Eli Whipp (Chaske Spencer) upon arriving out West. Although they both face certain challenges, there’s a kindred spirit between them. “I felt it was because he could relate to her on the trauma of loss because they both lost their families,” Spencer tells TV Insider of Eli’s willingness to help Cornelia.

A Pawnee Scout, Eli has no obligation to Cornelia, but her quest to seek justice for the wrongs her son experienced touched him. “I think that resonated with him,” Spencer continues. “And throughout the series, I think why he stays is because she’s a light in his life and it helps him to open up.”

Once they finally do face David Melmont, she’s unable to follow through with killing the villainous man who continues to taunt her. That honor goes to Martha Myers (Valerie Pachner), another woman who was wronged by David as well as Eli who delivers the fatal final blow with a blade. With Sheriff Robert Marshall (Stephen Rea) in tow, he warns that trouble could come for Cornelia and Eli if they stay together as he’ll be hunted for David’s murder.

In order to each give them a chance, the newly-bonded pair separate with many tears and longing embraces. Yelling out to the landscape, Eli chants, “I cherish you.” The next sequence fast-forwards 13 years in time to 1903 when Cornelia is leaving her family’s estate in England to attend a show titled “Flathead Jackson’s True Tales of the Wild West.” The performance features White Moon (Forrest Goodluck), the young man Cornelia and Eli saved during their journey together. Earlier in the season, she’d asked the doctor that she’d left the boy in the care of to send her a photograph and update when he was 18. Now, he’s all grown up and performing around the world with this traveling show.

Time hasn’t been kind to Cornelia who is now suffering the more extreme effects of her illness, shrouding her face in cloth to hide the decay from others. “I think she has such dignity as a character and there’s dignity in letting go and letting go of love and letting go of who you are or who you were physically,” Blunt tells TV Insider about Cornelia’s ending. “She knows that there’s this sort of decay going on in her that’s been inflicted upon her. It’s not fair, It’s not right. But I think she’s a fatalist. I think she believes in destiny.”

Cornelia’s illness is uncovered when she resists Eli’s advances to be closer, knowing that by acting on such urges could doom him too. That certainly factors into their separation as well by the end, but we never get a follow-up with the Pawnee Scout. He’s referenced in Cornelia and White Moon’s reunion, as the boy gladly shares he’s portraying the legendary man in the stage show he’s traveling with.

“I have my own story in my mind, but I’m not gonna say,” Spencer teases of what happened to Eli after Cornelia left America. He does offer, “I think Eli lived a long, good life.” What that life entailed remains a mystery, but Blunt reassures there’s peace there. 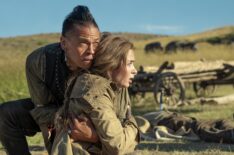 “It’s what she first says in the first lines of the show. ‘We believed in the stars.’ And she knows that these are her stars.” While Cornelia may not have had the happiest road in life, she managed to find hope along her dim path because of the stars Eli brought to her sky. “There’s [something] so dignified in accepting her lot in life and she has seen love and she has seen kindness and there’s peace in seeing through what she did. I love that about it,” Blunt muses.

And so, it may not have been the happiest of endings for the traumatized Cornelia and Eli, but their meeting and connection is what brought them the kind of peace they needed in the end. What did you think of The English‘s ending? Let us know your thoughts in the comments, below, and relive every epic moment from the show by streaming the series on Prime Video.