The Calling aims to be a different kind of cop show. Not just in the sense that it has season-long narrative arcs as opposed to the one-and-done episodes of crime procedurals, but also in the way its main character, Avi (Jeff Wilbusch) approaches crime. The David E. Kelley-produced drama is streaming now on Peacock. Ahead of the premiere, executive producers Jason Horwitch and Jonathan Shapiro (who also writes for the series) explained how they made The Calling different from other shows in the genre.

Kelley serves as executive producer, showrunner, and writer for The Calling, based on the Israeli author Dror Mishani’s Avi Avraham novels. It tells the story of NYPD Detective Avraham “Avi” Avraham, whose belief in mankind is his metaphorical superpower when it comes to uncovering the truth. Avi is guided by a deep sense of spirituality and religious principles, leaving him to question his own humanity when a seemingly routine investigation turns upside down.

TV is inundated with more crime shows than we can count, and it’s been that way for decades. In recent years, especially in the time since the George Floyd protests, procedurals have drawn criticism for failing to address the subject of police brutality. Some shows have begun to address the topic of police reform in recent seasons as a result of this discourse. But some people argue that cop shows cause more harm than good.

Any new cop show will face this line of critique. Horwitch and Shapiro tell TV Insider that was indeed on their minds in the making of The Calling. Here, they explain how they think Avi is inherently a response and challenge to the typical TV detective. Shows like Law & Order: SVU have included plot lines about police reform in recent seasons to coincide with the discourse happening in real life. Avi takes more of a “human focused” approach to law enforcement and investigations. Do you see that as a way to incorporate your show into public discourse about police reform?

Jonathan Shapiro: I think we touch upon it in a highly appropriate way for our show, because we make it very much personal to our series regulars, which frankly is dangerous because it’s such a hot button issue. But I give Jason full credit for leading into it rather than leaning away from it.

Jason Horwitch: Everybody involved in the show is mindful of the inflection point that all crime shows are at right now and the need to reflect change in society and the changes that are necessary. Like Jonathan says, I think for us it’s not so much a one-plot-only thing like SVU or another Dick Wolf show. It’s how these sorts of stories and these situations affect our characters. How much does The Calling pull from headlines like other crime shows?

Horwitch: Not much at all. The show’s based on a series of detective novels, so we’re gonna be adapting those, but they’re adapted rather loosely in translating them from Tel Aviv to Brooklyn. A lot of the stories and the characters that we also think about adapting are not quite ripped from the headlines, but ripped from the headlines from 2,000 years ago. There are biblical stories stories from the Torah that we’re interested in treating.

Shapiro: We did a tremendous amount of research in Brooklyn, going to police precincts, meeting with police officers, meeting with community leaders, meeting with leaders in the Orthodox community. And so rather than rip from the headlines, very often what we’re doing is trying to tell stories that we think should be in the headlines. I think that’s another way that the show is different.

What do you think sets Avi and his team apart from the rest of the genre?

Horwitch: This is a different kind of detective, because beyond just what and who, this is a character who wants to talk and think about why. This is somebody who’s spiritually connected not when he walks away from work, but all of the time in his daily life. He’s interested in not only in what took place but in offering, seeing, and really listening and offering a suspect the opportunity to atone. The possibility of redemption is real for Avi, so it’s not just somebody commits a crime and his job is to put them away and forget about them. He sees all people as worthy of redemption and atonement. And I think that’s brand new now.

He’s fortunate to have a captain in Davies [Karen Robinson] who’s somebody who recognizes that he goes about things differently and that there’s value in that. She trusts him and allows him latitude in how he approaches interrogations and investigations, which I think in a lot of precincts would probably be a problem. And as for the other people in the precinct, he has a history with Earl. He’s known Earl for a long time. And later in the season you get into things that they’ve been through together.

Avi also has a blind spot in terms of how he relates to the world and how the world sees him, and so being partnered with Janine [Juliana Canfield] is something I don’t think Avi realized he needed. But once he has it, he grows from it tremendously. Shapiro: I would add that unlike every other detective, he’s driven by a sense of the soul. The idea that both the perpetrator and the victims have one, and that he has a calling to serve that soul, both of the individuals and for the community. He’s the only detective whose life is very much founded in the 19th century German romantic movement, that I’m aware of. We haven’t had a lot of 19th century German romantic perspectives. So everything he loves from Caspar David Friedrich paintings to the music he enjoys, to the process of deductive reasoning is very much of a different time.

We have jokingly said that the secret to this show is he’s a time traveler, but he’s actually not mystically traveling in time. He just happens to be rooted in the 19th century. And so his faith, he’s born an Orthodox Jew, but it’s a very specific form of Orthodox Judaism that started in the 19th century, primarily in Germany. That is a modern version that says we’re supposed to be questioning everything and understanding everything. What could be a better training for a detective than a sort of holy mission to discover and strive for truth?

Did you see that side of Avi as something that was missing in crime procedurals?

Shapiro: I think it’s missing in life. I actually think what makes this seem so new and transgressive is, he’s embracing what used to be cardinal virtues, what used to be considered worthy of a human being, which is to try to discover the truth and to do justice to everyone, for everyone. 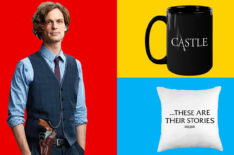 Horwitch: I would also add that with regard to a character on television, I do think this character is kind of an antidote to a lot of detectives that have been on television. Let’s take Vic Mackey, for instance, The Shield from 20 years ago, that was character. It was a very finely put together show, but that was a character who was violent at his core. “Good cop and bad cop have gone home for the day, I’m different kind of cop.” And then he takes a phone book to somebody’s face.

I think in the intervening 20 years, look what America’s gone through: two wars, we’re an incredibly fractured country right now. I think that Avi is what’s necessary as a kind of antidote to that. Let’s try something different. How about listening? How about seeing people? How about giving them a chance? Avi’s unique in that way. In the way that Jonathan’s talking about that he is a throwback to the things that he loves and how he goes about things and how rigorous he is, I think he’s really modern in that way. He’s so retro that he’s modern in how he sees people.

The human element can’t be ignored seems to be Avi’s M.O. for this. Do you think that will push the needle at his precinct and force his colleagues that maybe don’t agree with that point of view to consider his perspective?

Horwitch: His methods are effective, and I think everybody’s influenced by him. Earl [Michael Mosley] is somebody that Avi has known for a long time from when they were street cops, and he’s somebody who’s going through the process of evolving and changing in necessary ways.

Janine is somebody who has a pretty set worldview and her feet firmly rooted on the ground, so it’s really his techniques of approaching people and seeing them as humans that intrigues her. It’s not so much prioritizing the facts involved in the matter at hand, but who these people are and how he relates to their lives that she will learn from. Shapiro: She’s gonna learn all about the special talents that he brings to the job, but that’s gonna open her up to questioning some of her more personal fundamental truths. And so their relationship is going to be not so clearly teacher/mentor. I think they both learn from one another in ways that they didn’t expect.

We’ve been so science-driven in these detective shows. When I practiced law, we talked about the “Bruckheimer effect” or the “CSI effect” saying that people have come to think that detective shows and crime shows are all about applying the newest science. Of course, they have a place, but the reality is most cases are not solved. And those cases that are solved in the murder realm are solved through good, old fashioned deductive reasoning and hard work.

When Jason says he’s such a throwback, he’s modern, that’s the truth. Science can only take us so far when we’re dealing with crimes of the heart, and his understanding of the heart and what motivates people, as his boss says at one point, “you can’t learn what he knows.” But it says something about Janine and her hopefulness that she wants to try anyway.

The Calling where to stream