On General Hospital, Carly Corinthos (Laura Wright) got detoured on a recent business trip and wound up in her childhood home city of Jacksonville, Florida where she tried — and, alas, failed — to protect her adoptive mother’s gravesite from being redeveloped. In a series of emotional scenes, she opted to scatter Virginia Benson’s ashes into the Atlantic Ocean — and as viewers saw on Friday, she wasn’t alone. Drew Cain (Cameron Mathison) was by her side, lending emotional support.

Today’s episode continues with the show’s remote footage, which was actually shot in Malibu. Mathison chatted with TV Insider about taping on remote, what short-term and long-term conflicts Carly and Drew are facing, and his plans to travel to Memphis, TN along with several other GH cast members for a meet and greet at Graceland this weekend.

The second half of the Florida remote airs today. What was shooting there like?

Cameron Mathison: We had sand and ocean so we were good to go! It was beautiful. We had the most spectacular day. It was windy but the footage is spectacular.

How has this sojourn to Florida strengthened the bond between Drew and Carly AKA #Crew? Friday’s episode ended with them kissing. Are they simply caught up in the emotion or is there something more here?

They’re there for each other at a time when they both really need it. They have an understanding where it’s not going [necessarily] to a romantic place but they’re still going to be close friends. Drew did whatever he could with his connections to help make things happen [regarding Virginia’s grave]. It works out for the best because they recognize the similarities that are drawing them together. We’ll see where it goes.

What are the challenges that go into shooting on remote?

I do a lot of location shooting on holiday films where we shoot eight to 10 pages a day. When I heard we were shooting 45 pages on location for this, I couldn’t imagine getting it down but we have such a great crew here at GH. The elements are what they are. There were no clouds so the lighting was going to stay constant. We had two people who are used to being in the moment and knocking it out. We had three cameras and a drone… you don’t typically have that on location. Laura and I came in prepared. We made it happen. Phideaux [Xavier], the director, was great about rolling with the punches. It’s a much more dynamic production than it is in the studio. You’re constantly ebbing and flowing.

Did you shoot the beach scenes before or after the interior scenes at the studio in this storyline?

How do you track continuity from an acting perspective?

It’s easy when you’re working with Laura Wright. We talk about the scene before. We run lines and remind each other where [our characters] are [emotionally]. There’s an element of trust. We work similarly. [Laura] likes to hit the ground running, which makes it so much easier.

Can you tease and/or speculate on any future conflict for the couple?

That’s a good question. It’s one I’m often asked. In the short-term, it’s the secret that Carly has been keeping for Drew.

She outright lied about that to Drew. I hope it doesn’t become a huge deal. I think Drew might understand why she did that. However, it could inform him when he has doubts. I’m not sure how it’s going to play out. The long-term hurdle, I think, will be Carly’s dynamic with Sonny [Corinthos, played by Maurice Benard]. There’s a deep history there. When relationships have run that long and are that connect and deep… you never know.

Speaking of getting out of the studio, you and several other GH cast members including Laura, Maurice, Katelyn, Genie Francis (Laura Webber Collins), Donnell Turner (Curtis Ashford), Eden McCoy (Josslyn Jacks), Brook Kerr (Portia Robinson), Tajh Bellow (T.J. Ashford), and Dominic Zamprogna, and executive producer Frank Valentini are headed to Graceland in Memphis, Tennessee later this week for a big fan meet and greet. Actor/singer Rick Springfield (ex-Noah Drake) is going to perform, too. Have you ever been to Graceland with GH?

No. But I was there for Good Morning America. Lisa Marie Presley and I were in the living room. She gave us a private tour of the vaults. A few years later, I went back and talked to Priscilla [Presley, Elvis’s widow] for Entertainment Tonight when the hotel and museum were launched. Priscilla gave me a tour of some rooms that people don’t get to normally see. This upcoming trip to Graceland will be the most fun I’ve ever had. Everyone from the show who’s going is such a blast! 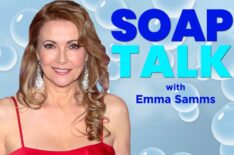 What do fans love most about getting to see you and other daytime stars in person?

It’s always nice, as you know, to be in a situation where you can hear direct feedback from the audience. It’s fun. They can yell at you and love you… it’s great for a lot of fun and a lot of other dynamics.

Fans get to tell you directly what the show means to them.

Yes. That’s definitely a big part of it — when you hear from viewers what the show means to them, how it got them through difficult times. You get a real first-hand perspective on how the show has impacted people.

Will you be doing any hosting duties?

I’ll be interviewing Genie. I’m very honored to be doing that. I’ll be guiding some other panels with some fun people. We’ll all be contributing to the hosting. It reminds me of the Super Soap Weekend days we used to have at Disney World in Florida.

For information on the 2022 General Hospital Fan Celebration at Graceland event from Friday, October 28 through Sunday, October 30, click here.