Johnny “Bananas” Devenanzio knows The Challenge. He has, after all, been in eight of them (between the regular seasons and Champs vs. Stars).

And now, he’s back in the newest season of MTV‘s Ride or Dies, entering as a twist following the first elimination alongside his partner Nany Gonzalez. The trailer for the season (below) shows host TJ Lavin’s famous “take care, hope to see you never,” which he’s said to previous quitters. And given how many people quit the final of The Challenge: USA — everyone but the two winners — we couldn’t help but wonder what Devenanzio thought of the CBS edition of the show.

What did you think of The Challenge: USA and the global tournament that’s coming?

Johnny “Bananas” Devenanzio: So the CBS version, I’m not gonna lie, I didn’t want to like it in the beginning right before I started watching it because I almost felt like — you get kind of like territorial. It’s like, this is our world, this is our space. And now you have all these people from other shows who’ve never been on The Challenge before kind of coming onto our turf with our host and our challenges and on a different network. I didn’t know how I was gonna feel about it.

But after watching this season, because I host a podcast about The Challenge, it was actually really fascinating to watch people who have never been on The Challenge and don’t necessarily know how to play figure it out. Just kind of watching how they navigated through the game and how they were able to play the game kind of without the interference or the influence of people who’ve been on the show for a long time was a really interesting thing to watch.

I do still think that there should have been somewhat of an MTV veteran presence on there, only because The Challenge is a very tricky game when it comes to not just the challenges themselves, but just how to navigate through the house, how to move through the house, how to just kind of play into what the game needs. I think that that was the one thing that was lacking was kind of that veteran leadership just to show the new kids the ropes. But it was an interesting experiment. I love the idea of this global tournament where they’re gonna take the winners from all these different franchises, and I believe they’re gonna include some MTV talent as well. So yeah, I think it’s gonna be a really interesting concept, and I’m fascinated to see how that plays out. And if I’m lucky enough, I would love to be a part of it as well.

Would you have finished that USA final?

Come on. Listen, even if I don’t know how to do a sudoku puzzle, I literally would’ve sat there until I died rather than just up and quitting, you know what I mean? I’ve never seen — and you’ve seen on The Challenge before on MTV, I’ve seen contestants quit, but generally, it’s very rare. The fact that you had, I think, six people quit in a final, it just goes to show, I guess, what the true challengers are actually made of, you know what I mean? 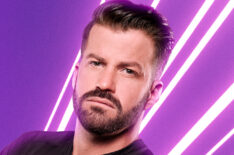 'The Challenge': Johnny Bananas on Returning for 'Ride or Dies' Feeling Like an 'Outsider'

That is The Challenge. It’s the mental part. People think that these daily challenges are what make The Challenge what it is, but it’s not. It’s the mental rigors of the game, and it’s pushing yourself so far past your comfort zone and just being able to deal with being uncomfortable and the elements and just pushing your mind and body to places that it’s never been. I honestly think that they did not know what they were signing up for. And I think that says a lot about the vets and about the challengers on MTV on the flagship show. That’s kind of what we’re used to doing. So I think when you’re comparing CBS challengers to MTV challengers, it’s like comparing apples to oranges.

We know how TJ feels about quitters, and the trailer for Ride or Dies gives us his “see you never.”

Yeah, TJ is not one to let quitters walk away without berating them. I think he had his hands full in the CBS final because I think that’s probably the most quitters TJ has ever seen — ever.