[Warning: The below contains MAJOR spoilers for the Chesapeake Shores series finale “All or Nothing at All.”]

Chesapeake Shores has fittingly gone out on a happy note, as we expected from a Hallmark series.

Executive producer Phoef Sutton breaks down the finale and teases what would’ve happened next for the O’Briens.

You ended perfectly, on the family gathering around the firepit. Was that always the plan?

Phoef Sutton: Yes. The idea of them all gathered around and Mick toasting to family, that was the plan that me and Mark Legan had from the beginning. It was a beautiful moment. It wasn’t the last thing we shot, unfortunately, it never is, but there was a real feeling of happiness and yet melancholy when we shot that scene.

The montage was so good, too.

Oh, good, you liked that? We spent a lot of time on that, on the song, too. I liked the version of the song that was used, the opening song. Why was it important to have Mick and Megan get married, versus just being together or talking about another wedding?

Weddings are so important, so symbolic, and this whole show has been built around weddings and Hallmark itself is sort of built around weddings and so it seemed like you had to see them actually tie the knot, get married, be together again. It just seemed like the natural way of doing it. And we were very lucky because the weather was not very agreeable this year when we shot — it was cold and rainy most of the time — but on the day that we shot the wedding, it was a beautiful day. It was perfect. We felt that was sort of symbolic too, that nature smiled on us that day.

Abby and Evan getting engaged did seem kind of fast even though some time had passed in-show.

I agree. If the show was continuing and if there was another year, the proposal would’ve been probably in the middle of next season or even the end of next season. But we felt that we needed to tie things up and give everyone a sense of continuing and happiness. I think originally I had him propose to her, but not go through with it. And then I decided, oh, what the hell, I should just have him propose to her. [Laughs]

At the beginning of the season, you told me that you moved forward things that would’ve taken two or three seasons because it was the end. That seemed like that.

Yeah, the last two episodes probably would’ve been a season in themselves. There’s a lot that happens in them, but I didn’t want to leave people hanging. Was the plan always to possibly end the series with Abby engaged, whether to Evan or someone else?

Not really. The plan was obviously to have her and Evan together and happy and in a relationship. It wasn’t really planned to get them engaged really until I think the very end.

Jess is pregnant! That conversation she and David had reminded me of what you’d said about condensing things.

Yeah, that’s true. It was a condensed version of the next season. [Laughs]

Given her complicated relationship with Megan, was putting her on the path to motherhood in-show something you wanted to include?

This was something that we’d always kind of intended. It was particularly helped by the fact that literally everyone who was of pregnancy age this season, the actresses all got pregnant or had babies. Laci and Jessica both had babies right at the beginning of when we shot this season. Meghan and Emilie got pregnant through the course of the season. So there was just such an air of pregnancy on the set that it felt right that she would accept being a mother and want to go with that. I love that you gave Bree, the author, the big love story speech to Luke. Compared to the other couples, they’re the least stable in terms of their relationship.

I wanted to have Luke come back and decide to give it a try. I was surprised by the reactions of the fans to the Bree and Luke story, that they seem to have really, really taken to that, which I was very gratified by. They’re the least alike, they have the most challenges to overcome, and so perhaps because of that reason, people were really rooting for them to get together. And the actors have such chemistry together. The scene in the hospital bed in the ninth episode — I teared up when I was watching it. It was a lovely scene and they both played it really, really well. They have the most overcome, but I think they’ll do it.

Why have Kevin choose now to actively pursue becoming a doctor versus talking about it happening in the future? Was that something that was condensed?

With Connor and Margaret, it was more about the work than their relationship, though that is all tied up together, in these last episodes. Was that on purpose?

Yeah, since they’re working together, that’s a special kind of tension that you get, and I wanted to put in that that is a problem when you have two people who are partners and they disagree about a case — what do you do? How do you take that? I think that the argument that they have in [Episodes] 9 and 10 is very real. I don’t think that either of them saw the other’s point of view totally. But they were able to work through it when they looked at the actual case and trying to work the case and trying to do what is needed to do. I really liked that. Naming Kevin and Sarah’s baby Mick — were any other options seriously considered?

No. As soon as we decided he was gonna be a boy, I knew they’d name him Mick.

Who’s Mandrake (Wesley Salter) going to work for? He has options with Evan and Abby.

There’s that, and you talked about Kevin as a doctor. What else would’ve happened in another season?

Obviously, Evan and Abby would be setting up the house together and trying to figure out — I didn’t get to this, but I wanted Evan to decide to step away from business and sort of retire and work in charities in the future. I would’ve gotten to that. Perhaps Mandrake would be in charge of that aspect of the family business. Obviously Mick and Megan will be traveling the world and then come back and Mick will be dealing with the fact that he is retired and that always holds its special challenges. And he’s in recovery.

Yes. I don’t think Megan would’ve stayed working at the Getty. I think perhaps I would’ve made her like point person on the East Coast of outsider art for the Getty so she could live at home and still be working for them. Obviously Kevin would have to decide to go to medical school, and that’s a wonderful world for a television show. If, as I believe would’ve been the case, Connor and Margaret win the case with David’s father, then there would’ve been a real influx of business for them. They would raise their profile. They’d have to maybe move to a bigger building, have to hire other lawyers. They would be growing and have to decide whether they want to move the practice from Chesapeake Shores to Baltimore or Washington D.C.

We have David and Jess with the vineyard, which is a wonderful thing for them to be dealing with, all the problems of running a vineyard and doing that and working with the with the movie star. I think the movie would’ve gotten going, and Bree would go to LA to work on the script. And then there’s the problem with a long-distance relationship with Luke.

Because we lost the set of The Bridge near the end of the season — they actually were tearing that building down — I wanted to put Luke in some other position, maybe running Sally’s or something like that. There are many, many, many things that I have in mind if it continued. 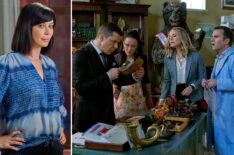 So what are the chances of it continuing in some way, whether a spinoff, movie or another season somehow?

I can’t really share anything yet, but we are in discussion about something like that. I don’t really know what it would entail yet, but I don’t think you’ve seen the last of the O’Briens, let me put it that way.

You mentioned you didn’t get to Evan stepping away from the business. Was there anything else you’d wanted to do this season or in the finale that you didn’t?

We toyed with the idea of burning The Bridge down because we were losing the building anyway. We toyed with a spectacular fire at The Bridge, but we couldn’t quite make that work with our budget. Other than that, we pretty much got everything in that we wanted to.